The resulting institution was called Lanchester Polytechnic: 'Lanchester' after the Midlands automotive industry pioneer, Dr Frederick Lanchester, and 'Polytechnic' meaning 'skilled in many sciences and arts'. 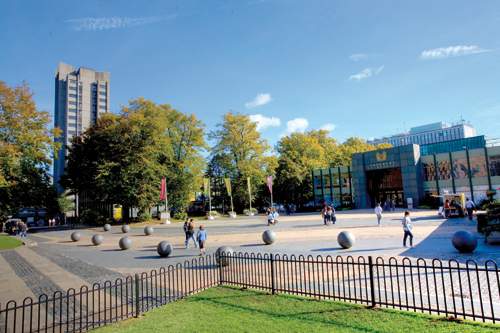 In 1987 the name changed to Coventry Polytechnic and in 1992 the University was set up under UK Government legislation, as laid out in the University’s Instrument and Articles of Government.

The phoenix was a mythical bird with splendid plumage, reputed to live in the Arabian Desert. Fabled to be the only one of its kind, the phoenix lived for five or six centuries, after which it burned itself to death on a funeral pyre of aromatic twigs ignited by the sun and fanned by its own wings. The phoenix rose from the ashes with renewed youth to live through another cycle.

Such a symbol is a fitting reminder of the way in which the city of Coventry rebuilt itself after suffering devastation during the Second World War. It is a symbol with which Coventry University is proud to be associated and to have adopted as its own.