Eukaryotic cells are intrinsically interesting and understanding their development, behaviour and ultimately death has always been a fascinating pursuit for any Cell Biologist. My own interest focuses on how cells interact and organise to become tissues and structures through the process known as cell polarity. A background in both human neurodegenerative disorders and human viral pathogens has lead me to want to understand the fundamental processes that help cells form into tissues. This is done through studying the protein complexes that form between cells, how this influences cell signalling and to ultimately understand how disease, ageing and pathogens lead to the breakdown of cell polarity and the development, progression and maintenance of human disorders. Currently this work is focussing on liver cell polarity and its role in ageing, fibrosis and cancer. 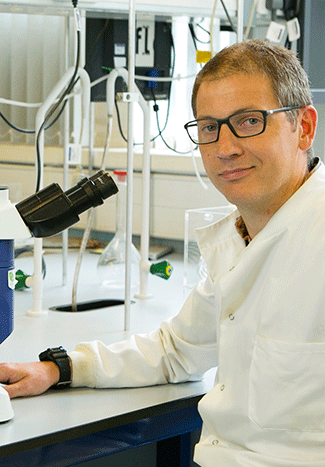 My major research interest is in studying liver cell polarity and how tight junction proteins interact with adhesion junction proteins to form polarized tissues/structures. This is particularly relevant when looking at the changes that occur in the liver and its regeneration after injury and in relation to disease, ageing and the presence of human pathogens. This interest has developed from looking at the effects of liver cell polarity on the viral entry process of Hepatitis C.

I previously spent 5 years working within Professor Jane McKeating’s Lab at Birmingham University looking at the role of HCV and cell polarity. This has resulted in me being involved in 11 published papers in journals such as Nature Medicine, Gastroenterology and the Journal of Virology. This work has also been presented at the Annual HCV meetings in 2008 and 2009. Prior to this I was an Investigator Scientist at the MRC Functional Genetics Unit at Oxford University; here I worked principally on invertebrate models of human neurodegenerative disorders such as Alzheimer’s, and my work on a Drosophila model of Alzheimer’s resulted in me being awarded the Westminster Medal 2006 for excellence in research and R&D at the House of Commons.