Use of Geographical Data for Hazard Management

Remote sensing and geographical information systems (GIS) have many applications in the field of remote sensing. These applications range from the identification of areas at risk using satellite imagery, and the consequent production of hazard maps, to the detection of regions most severely affected, both during and following a disaster event.

During, and in the aftermath, of hazardous events rapid assessments are required in relation to the evolution of the event and the associated damage and destruction. Often however, assigning personnel on the ground is a hazardous proposition and indeed, determining where those personnel might be of most use is often indeterminable, particularly in the early stages. Additionally, hazardous phenomena may occur in remote locales, away from ground monitoring equipment, or in regions with few resources to implement any monitoring strategies.

Remote sensing, and allied GIS, have the potential to address some of these problems. Satellite imagery has the advantage of allowing for initial assessments without the requirement for risking personnel. Following the 2010 Haiti earthquake for example, the use of satellite imagery, and concurrent mapping techniques, were crucial in determining those areas which had experienced most damage and which consequently required the most rapid emergency response.

In terms of volcanic activity specifically, as active volcanoes are generally hot, we can use thermal detectors which are found on numerous NASA and European Space Agency satellites to observe them and monitor their behaviour over time (Blackett 2014) (Fig 1). 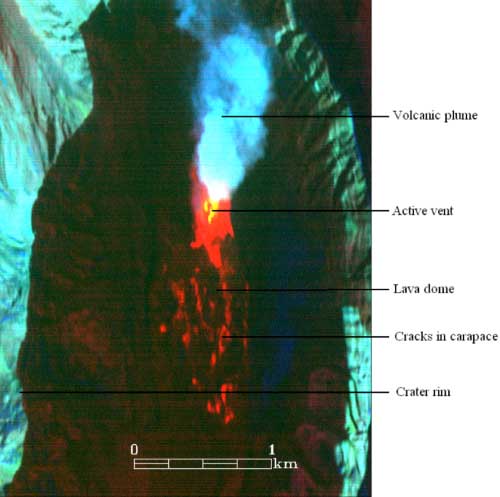 Using such data, researchers within CDMHR (working with both the Alaska Volcano Observatory at the University of Alaska, Fairbanks, and the Hawaii Institute of Geophysics and Planetology) have been able to identify the normal ‘behaviour’ of various volcanoes globally. For instance, with regard to some volcanoes, regular and periodic eruption episodes have been identified from historical satellite imagery; in other cases, activity has been determined as irregular or changeable (Fig 2) (Blackett 2011; 2013; Wright, Blackett and Hill-Butler, submitted). Recent CDMHR work focusing on Indonesian volcanoes has also shown that remotely sensed data provides a much more accurate and complete record of volcanic behaviour than observations made on the ground (Blackett in preparation).

The determination of regular and periodic eruption episodes at certain volcanoes shows the potential to provide a reliable indication of activity to be expected in future. This is clearly of use with regard to all volcanoes globally but has particular utility for volcanoes that are under-monitored, remote and/or which lie beneath some of the world’s major aviation routes (e.g. Indonesia). Using such information is therefore incredibly useful in assisting authorities in their disaster preparation and mitigation planning – both on the ground and for the aviation industry. One of the Centre’s PhD students has been awarded a six-month Fellowship at the Hawaii Institute of Geophysics and Planetology to further these lines of research.

The remote sensing and GIS work of the CDMHR were submitted as part of the Unit B7 (Earth Systems and Environmental Sciences) REF submission. 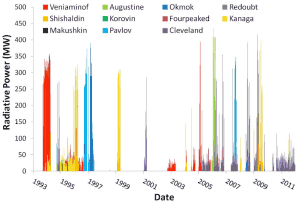 Fig. 2. Patterns of activity at Alaska’s volcanoes since 1993, as determined using remotely sensed thermal imagery (from Blackett, Webley and Dehn, 2012).