As part of their design specialism module, students on the MSc Industrial Product Design Course participated in a live collaborative project with an innovation team at the BMW MINI plant, Cowley, Oxford. The 7-week project, led by Clive Hilton, Senior Lecturer in Product Design, explored the application of the Chairless Chair, developed by Swiss ergonomics company, Noonee http://www.noonee.com/.

The project objectives were four-fold: 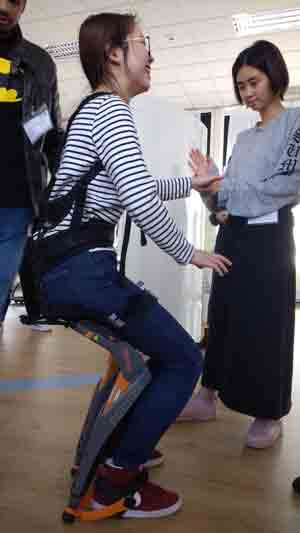 After joint discussions with Gunther Boehner, the Director of Assembly at Oxford, about the scope of the project and its benefits to BMW MINI, to the University and to the students, a brief was constructed to deliver those benefits whilst also meeting the obligatory academic and course learning outcomes. A visit to the assembly plant at Cowley led to a detailed tour of the assembly production facility followed by a comprehensive introduction of the Chairless Chair itself. Students were given the opportunity to experience wearing the device which delivered valuable first-hand insights into its functional realities - and its limitations.

As a group project, each of four teams conducted extensive research into the ergonomic and functional aspects of the Chairless Chair, noting both the design weaknesses and its potential benefits. Research into industrial assembly worker health statistics revealed that musculo-skeletal injuries are a major contributor to both long-term ill-health issues and to high on-going concomitant costs to employers through work absences. This provided objective evidence to support the health and cost justifications underpinning the ambition for the project.

Analysis of workers’ ergonomic engagement at several assembly stations focused on key processes to determine whether deployment of the Chairless Chair might (or might not) confer benefit. 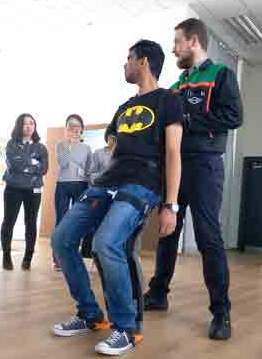 For each team, the outcome of the project was a summary findings report and a 15-minute presentation to the management team at BMW MINI, which was delivered in the manner of four competitive professional agency pitches to a client, each having to wait anxiously outside the presentation room until their own turn. This gave the students a highly realistic insight into the world of how professional designers conduct themselves and communicate their proposal narratives to clients in a commercial context. Each team had to defend themselves under precisely focused questioning from the BMW management team. After all the teams had presented, a light lunch was followed by an immensely valuable feedback session which made clear how pleased the BMW team were with the student’s efforts and that they felt that there were some genuinely innovative ideas within the presentations that they had not previously considered internally.

On the 27 September 2017 we received an email from project lead at BMW MINI to advise us that they will be implementing a pilot roll-out of the Chairless Chair in line with the proposals put forward by the student teams. Beyond that, BMW MINI also wish to collaborate further with postgraduate students from the School of Art and Design in a mixed-disciplinary project to design a Visitor Experience at the Cowley plant. The project is scheduled to commence in late October. On the basis of these student projects discussions are ongoing regarding other enterprise collaborations.