Coventry University Alumnus Olubankole Omokivie was shortlisted out of thousands of applications to qualify as a finalist for the Education UK Alumni Professional Achievement Award. This award recognises alumni who studied in the UK who have shown exemplary leadership and achievements in their professional industry, and who demonstrate the highest level of integrity and character in their professional career.

Olubankole graduated in 2008 with a Master’s Degree in Disaster Management and used these skills to design the Nigeria Waterways Emergency Preparedness and Response Unit (NWEPRU). NWEPRU was created to develop an integrated inland waterways preparedness and response mechanism framework for Nigeria – the impact of which has shown a vast decline in boating disasters in Nigeria in 2015 as well as an increase in awareness in the importance of life jackets in the ‘No Life Jacket No Travel’ Scheme. 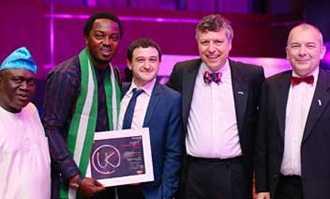 Speaking of his time at Coventry, Olubankole said:

‘Studying at Coventry University UK prepared me immensely for the challenges [of] better management of emergency planning and disaster preparedness/mitigation, with the ability to be able to adapt my ideas to effectively fit and function in the context of a developing country like Nigeria’

The ceremony was held on the 4th of March in Lagos and Olubankole was joined by the Vice Chancellor of Coventry University, Professor John Latham to celebrate the fantastic achievement he has made professionally since studying at Coventry University.

Vice-Chancellor Professor John Latham attended the event as part of a week-long delegation to Nigeria and was joined by:

If you are interested in sharing your alumni story with us, please let us know.