The aim of this project is to investigate the relationship between mosquito-vectored Zika, inadequate provision of secure and safe potable supplies, drainage and sanitation. Objectives:

We intend to disseminate our results via workshops at State and Government level, to pass on our knowledge of the need for a reliable, safe and secure potable water supply which would obviate the need for residents to store water in case of scarcity. We will also explain the multiple benefits of the SuDS approach, and how it can be designed into settlements using the Ceará and Rio de Janeiro case study sites. As well as general SuDS, the safe disposal of greywater will be explained, as will the utility of rainwater harvesting, both of which will deny the mosquito access to water to lay its eggs. Our comprehensive reports will give further details to engage the stakeholders and will be available at the workshops. We will maximise the potential of this project by producing a decision support tool (DST) to be trialled at State level which will indicate what infrastructure is needed and where it can be designed in to the existing buildings. Our ambitious aim in the future is to retrofit these infrastructures into our case study areas and monitor the effect this has on the mosquito population. In the two case study areas, Ceará and Rio de Janeiro, we will work with the respective regulatory agency and the National School of Public Health to host a website giving our results and recommendations. We will also invite government representatives to monitor over the long term what has been undertaken by public providers as a result of this project to invest in civil works to improve sanitation conditions.

The workshop began with a round table discussion of the research interests of those present and included suggestions for future research and potential for funding.

SC gave a talk on “Drainage Worldwide” to show the impacts of urbanisation on hydrology and hydraulics. This justified the use of Sustainable Drainage Systems (SuDS) to address issues with water quantity (flooding), water quality (pollution), amenity provision and making space for biodiversity. She then specifically talked about the research carried out at CAWR on “Drainage in Challenging Environments” which put into context the Zika project by discussing SuDS in tropical climates, as well as applying SuDS to informal settlements in South Africa (Royal Society funded project: SC PI) on utilising biofiltration at the large scale to improve the water quality in polluted rivers, and at the small scale of one or two shacks. The small scale, being constructed in the UK, would use greywater to irrigate produce with an economic value. The refugee camp work (funded by the Humanitarian Innovation Fund: SC PI) was also explained which lead into an update on the Brazil (Zika) project, funded by a Newton Award (SC PI).

MB updated the data collected and mapped during the project including the distribution of Zika/ microcephaly in Ceara generally, and Fortaleza specifically. He also explained the methodology used, and future plans for better manipulating the maps so that they could extract more information on relationships between the factors used and the distribution of Zika/ microcephaly.

FW gave a talk on “Drainage policy, governance and policy” – this was mainly based on his research experiences in the UK, and gave a context to similar, but different, Brazilian approaches to drainage. There was great interest shown in all 3 presentations, which generated discussions, questions and lively debate, amongst the members of Fiocruz research staff and post graduate students (both Masters and Doctorate). 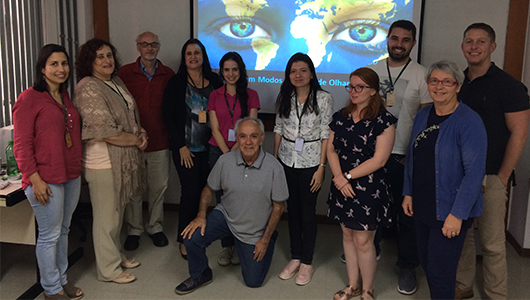 Professor Demetrios Christophidis (DC), a visiting professor from the University of Brasilia, Department of Civil and Environmental Engineering gave a talk on his vision of drainage as Working with Nature, giving examples in Sao Paulo and Minais Gerais. Later he talked about water quality concerns, and Sponge Cities. He is a specialist in the Sustainable Management of Water Resources and Irrigation Agriculture and is President of the Ethics Standing Committee of the National Council of Water Resources.

The second covered the use of green roofs to improve the internal environment by reducing the indoor temperature. Heat Indices (HI) were computed for the models, and it was found that comfort was influenced more by humidity than by numerical temperature. Humidity was higher in vegetated roofs in comparison to non-vegetated and thus the HI index was higher potentially leading to heat stress.

Tatsuo Shubo (TS: Fiocruz) introduced his PhD project which was focused on the viruses contained in harvested rainwater from both urban and semi-urban areas, their impacts, sources and mitigation. 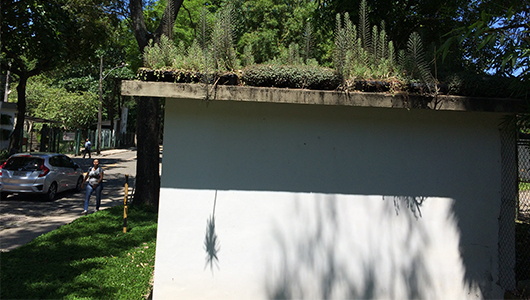 RCF’s test house on the Fiocruz campus, with a green roof 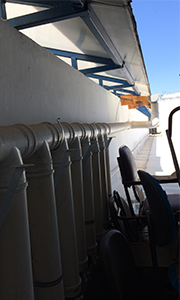 Dr Simone Cynamon Cohen (SCC) gave a talk about her research into Sick/ Healthy buildings and the relationship with the presence/ absence of sanitation. This was followed by a presentation of Brazilian case studies of river restoration (Rio Mosquito) by DC.

SC, FW, MB then met with DCK to discuss a Masters course to be held at Fiocruz on Sustainable Drainage which would be delivered once per year and would take up to 2 weeks full time. We suggested involving other CAWR researchers swapping out after a week so that more subjects could be covered, eg hydrological modelling. A Memorandum of Understanding (MoU) was also discussed with Analice Pinto Braga (APB) from Fiocruz’s Assessoria de Cooperação Internacional. The relevant forms from Coventry University and Fiocruz were exchanged and completed. They were then passed on to each institution’s Legal Departments for assessment. To accompany the general signed forms for the MoU, an indication was required of future activities; this was discussed and a draft document produced. We also discussed specific future research funding with DCK and SCC including visiting professorships/ researchers, PhD projects and research projects including Leverhulme, the Bill and Melinda Gates Foundation, WHO and UNICEF.

MB visited the Federal University of Rio to discuss future collaborations with Dr Hugo Karam, from the Department of Meteorology, Institute of Geosciences, Centre of Mathematical Sciences and Nature. A meteorologist, his expertise was remote sensing of the urban heat island effect, tropical hydro-meteorology, urban climatology, atmospheric modelling. One of his current projects is to statistically evaluate climatic variability and the dengue epidemic in Rio de Janeiro.

It has been agreed by Editora Fiocruz that a book be published about work undertaken for the Newton Fund including appropriate work by researchers at Fiocruz including post graduates (both Masters and PhDs). The title of the book is: “Informal Settlements and Sanitation”. The UK contingent have therefore agreed to 3 these are:

We met with Dr Ines RaÏ from Rio’s Department of Health, who explained their role in promoting health in the favela communities. We also met with a health visitor who visits individuals in favelas. We then met with SCC, Baltazar Morgado Neto (BMN) and a medical Doctor Fabiola Araùjo Cordeiro (FAC) to discuss the application of SuDS in different environments. BMN works for the NGO “VivaRio” and presented his biodigester/ green infrastructure work in Haiti and Nicaragua as well as his social and community engagement work in Rio’s Rocinha favela, whilst SC presented her work in other challenging environments. FAC was interested in provision of potable water in slums in Madagascar. We discussed potential funding opportunities, in particular the Brazilian National Council for Scientific and Technological Development (CNPq) which has regular calls for research-related visiting researcher opportunities.

We were taken to Fiocruz’s mosquito research lab (Controle de Vetores) where we met Dr Nildimar Honorio Rocha, Departamento de Entomologia and were shown preserved adult Aedes aegypti, eggs and larvae. We were able to discuss the latest methods of control and also the potential impacts of our project to reduce mosquito breeding sites.

We worked on the dataset downloaded from the IBGE website to produce more maps. Due to the closeness of gunshots and a bomb at the neighbouring favela in Manguinhos, we stayed in the building until it was deemed safe to leave.

We were invited by Dr Marcelo Gomes Miguez and Professor Aline Pires Verol, Civil Engineering, Federal University of Rio de Janeiro to repeat the talks we gave at Fiocruz on our research to an invited audience of post graduate students and staff and to discuss our approach with them. SC gave the talk on “SuDS in Challenging Environments”, MB on “Mapping and Statistically Analysing the Distribution of Zika/ microcephaly in poor areas of Ceara, NE Brazil” and FW on “Policy, Legislation and Guidance for SuDS in the UK”. These talks generated great interest and led to lively discussion.

We met with Dr Clarice Melamed and DCK to present the results of the mapping exercise (see example map below) and discuss other sources of data. We were also able to discuss more useful ways of manipulating the maps to represent the relationships between variables in a more accessible way. 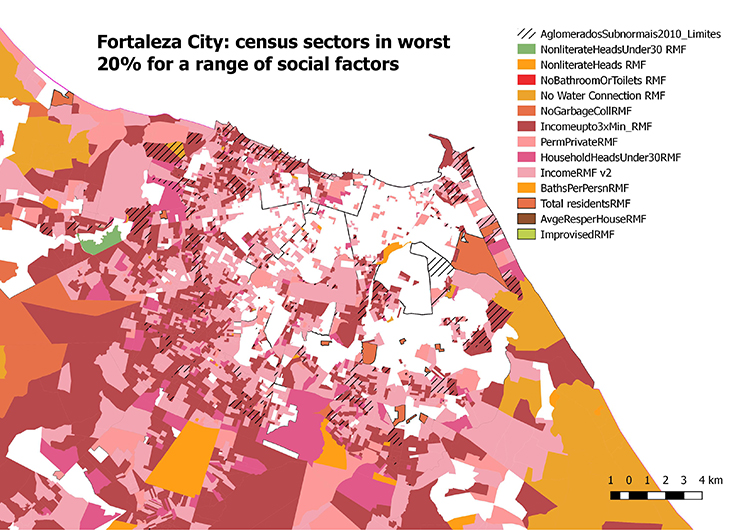 A GIS- created map to show some of the factors related to socio-economic and environmental conditions in Fortaleza, Ceara, NE Brazil which may be related to the distribution of zika/ microcephaly

For more information on this project, please contact Sue Charlesworth.