Coventry University has broken into the top 30 of UK universities today in the Guardian university league table 2015, rising six places to 27th overall and ranking ahead of nine Russell Group institutions.

Following the rise of seven places in the Complete University Guide published last month, the second of the major league tables of 2014 – published today in the Guardian newspaper – sees Coventry ranked best in the UK for the percentage of final-year students satisfied with feedback and assessment by lecturers, and top in the Midlands for the percentage satisfied with teaching quality. 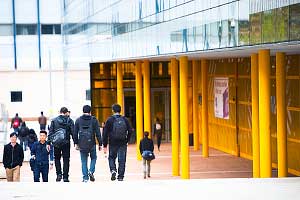 The University is also rated best in the country for film production and photography – which includes BA (Hons) Photography and BA (Hons) Illustration & Animation – and has four other subject areas ranked in the UK's top 10, including event management (5th), nursing and midwifery (9th), social work (10th), and building and town and country planning (7th).

Eleven of Coventry University's subject areas feature in the UK's top 20 according to the Guardian, including architecture, design and crafts, drama and dance, mechanical engineering and mathematics.

Coventry, which retains its position as the country's top modern university, has climbed 36 places in the Guardian league table over the past three years and is now ranked ahead of over a third of the Russell Group institutions – including the 'redbricks' Manchester, Liverpool and Bristol.

This is a really pleasing result which maintains the University's excellent performance in the national rankings. Our continued focus on giving our students a top drawer experience, not just in their academic work and feedback but also with placement opportunities and ever-improving facilities, is helping to cement Coventry's reputation as one of the best places in the UK to study for a degree.

It will be challenging to keep up this impressive momentum as we are now mixing it with the often quoted and highly respected Russell Group institutions, but I've every confidence the hard work and fantastic efforts of all our staff in pushing the University forward like this will continue in the years to come.

Coventry University was rated 'Modern University of the Year' in the Times and Sunday Times Good University Guide 2014, published in September last year, and was the highest ranked modern university in the history of the league table.

Coventry University has risen a further seven places to 51st overall in the Complete University Guide 2015 league table published today, and several of its subject...

Two former paramedic science students from Coventry University are starring in a new BBC documentary series focusing on the next generation of emergency service recruits.

A group of motorsport engineering undergraduates at Coventry University has become one of only six Formula Student teams across the UK to be awarded a prestigious cash...

Students at Coventry University have been working with a science and technology firm on an innovative solution to a problem faced by pubs and bars across the world.

Two fashion students from Coventry University are in the running for a national design award.