The testing and comparison of petroleum reservoir engineering modelling techniques requires the continued existence of standard models. A number of key models were developed 20-25 years ago, mainly under EU funding. Over the years these standard models have become unavailable as the websites that supported them have been decommissioned. The objective is to make them available to the research community at a single location.

The team leader, Prof Carter, was involved in the original development of these models and has retained original copies of the data sets. It will be a relatively straight forward task to create some web pages that allow researchers from both academia and industry to access the models. Some years ago Prof Carter created a site at Imperial College London to access two of the models. (https://www.imperial.ac.uk/earth-science/research/research-groups/perm/standard-models/)

There are some models that are still available elsewhere that we may seek to duplicate if permission can be obtained. These include:

Making these models available will allow researchers to access more than 100 person-years of reservoir modelling research. The models remain highly relevant to current research and the current situation is limiting the ability of researchers to test new approaches on the standard models that were previously used. 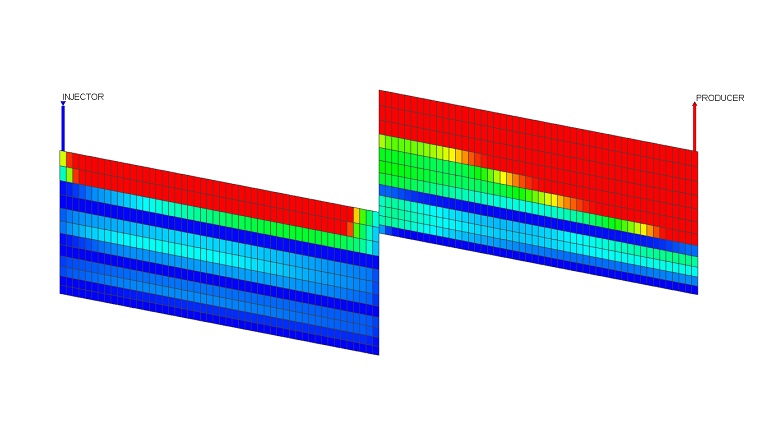 The IC Fault Model is a simple cross-sectional model of an oil reservoir that has been used to study history matching within the petroleum industry. The basic structure of the model is shown in the figure where we can pick out both it's layed structure and the fault. Water is injected on the left hand side, with oil and water being produced on the right hand side In its orginal form the objective was to determine three parameters, the fault throw and the permeabilities of the sand and shale, from monthly oil and water production data over a three year period. This is difficult because of the existence of multiple local optima of similar quality to the truth solution. When noise is added to the measurements the gobal optimium may not correspond to the truth. These isues have been examined in a many papers including:

Applications of the model have been expanded by the community to include more parameters, well control optimisation and uncertainty.

The simulation model is an ECLIPSE data set and consists of 1200 grid-blocks. The zip file below contains a test ECLIPSE data set, a python file that can generate further data sets and the history data used in the original studies. 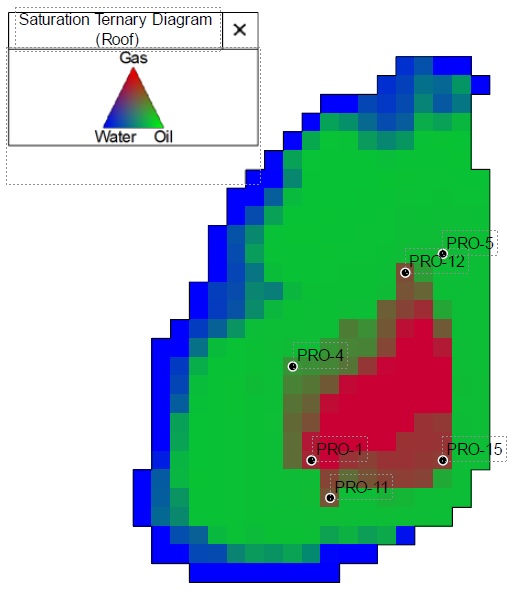 PUNQ (Production Uncerainty Quasntification) was an EU fund research project into history matching and uncertainty quantification. It involved research institutes and petroleum companies from across the European region. As part of the study a number of reservoir engineering models were developed to test various approaches to history matching. The S3 model was published for other groups working in the subject area to use. It has been widely used by many research groups

The PUNQ-S3 case has been taken from a reservoir engineering study on a real field performed Elf Exploration Production. It was qualified as a small-size industrial reservoir engineering model. The model contains 19x28x5 grid blocks, of which 1761 blocks are active. The field contains a saturated oil with a gas cap and an active aquifer. The object of the exercise was to predict future production given the simulation grid, the reservoir property data at the well locations, production data and a geological description of the reservoir.

The zip file contains: all of the necessary ECLIPSE data for the base case model, the production data at all of the wells, the measurements used to define the objective function and the geological description that was supplied to the groups involved in the project. 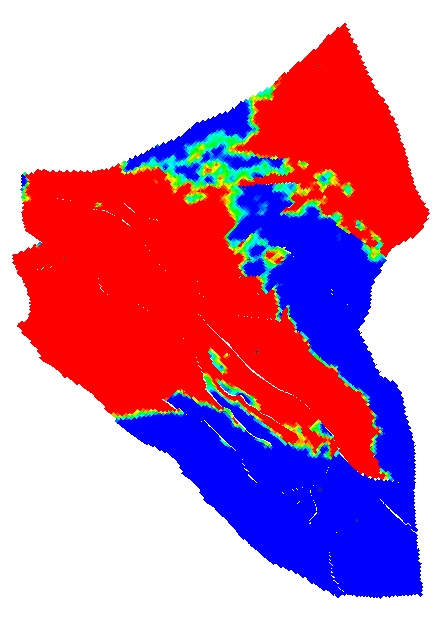 The Eternity suite of 31 reservoir models captures the uncertainty that existed during the initial development of the reservoir. The uncertainties were wide ranging including the reservoir structure, facies distributions, fault properties, relative permeability, fluid contacts and diagenesis. The objective of the original study was to place up to ten producer wells and five injector wells, as well as the export pipeline capacity.

The original study was carried out by E.On Exploration and Production as part of a research project on reservoir optimisation subject to uncertainty. The company have allowed the basic geological modelling to be reused for further research, although some of the details were changed. Latin Hyper-cube Sampling was used to sample the ten model uncertainites, which then allowed the realisations to be constructed. Each of the 31 realisations was checked by the geoscience team to ensure they were consistent with the original geological description used. The object of the study was to identify the pareto front created by the mean and standard deviation of the NPV across the 31 realisations.

The eight zip files contains the ECLIPSE data sets for all 31 realisations. Some of the individual files are used by a single realisation, while others are used by several, such as the well control file. The NPV for each realisation is evaluated by a python code. Producer wells are tested on the first day of production to ensure that they do produce oil. The economics code takes account of producers that are shut on day one due to excessive water production.