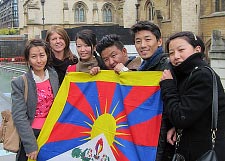 Five young Tibetans from the Indian Himalayan region of Sikkim visited Coventry last week as part of a cultural initiative to help them raise awareness of the political and economic situation in their country.

The visitors, who are third generation refugees from Tibet living in the Indian city of Gangtok in the foothills of the Himalayas, were hosted by Coventry University's Centre for Trust, Peace and Social Relations over the two days that they were in the city.

Forming part of an exchange programme called TibetXChange, the visit saw the young Tibetans meet with pupils at the Sidney Stringer Academy to share their experiences of being exiles from their own country living in India.

The group also met with young people in the Hillfields area of Coventry and were interviewed by community radio station Hillz FM, before taking a tour of the city's cathedral and paying their respects as part of Armistice Day.

Also on the agenda for the group's UK visit was a trip to the Welsh Assembly in Cardiff, meetings with Tibetan and Chinese scholars in Oxford and a tour of the Houses of Parliament in London.

Professor Heaven Crawley from the University's Centre for Peace, Trust and Social Relations organised the young people's visit as part of the exchange programme.

It was a pleasure to welcome these young Tibetans to the UK and in particular to Coventry. It's only fitting that in trying to raise awareness of the political and economic plight of their people in Tibet, they were able to join us in the city on Remembrance Day when we commemorate not only what many young people around the world did for their country, but also the importance of continuing dialogue to secure peace.

Students from Coventry Business School recently took part in an outdoor adventure in Shropshire with a leading outdoor education provider.

Coventry has been ranked ahead of the likes of Prague, Brussels and Osaka in a league table which rates the top 50 best student cities in the world – and it is one of...