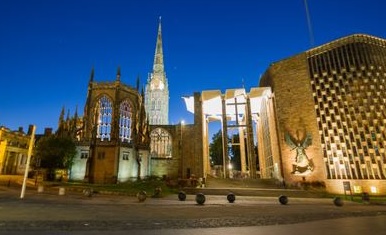 Coventry has been ranked ahead of the likes of Prague, Brussels and Osaka in a league table which rates the top 50 best student cities in the world – and it is one of only four UK cities to feature in the list.

The city, which is home to Coventry University and the University of Warwick, is ranked 45th overall in the QS Best Student Cities 2015 league table, and is ranked third overall for the rich diversity of its student population (second only to Melbourne and Dublin).

Coventry is highlighted for its large and vibrant student community and strong reputation among graduate employers – a reputation which, according to the QS guide, reflects the high repute in which the city's universities are held.

The city's array of theatres, art galleries, and sports and music venues are all mentioned as being part of the reason why it featured in the top 50.

Coventry University's globally-renowned automotive design course is also cited as a key aspect of the city's long history of leadership in manufacturing and design.

It's fantastic news that Coventry has been ranked so prominently in this global league table, particularly coming so soon after the impressive achievements of our city's universities in the Times and Sunday Times guide for 2015.

Coventry clearly excelled in each of the league table's criteria, including measures like affordability, desirability and student diversity. The city is also highlighted as having a good reputation amongst graduate employers, which is great news for the talented young people who are choosing to come to Coventry to study from all over the world.

Later this week Coventry University is up for a leading industry award in recognition of the excellent work it does to help its students to secure international opportunities during their time in the city.

A new Coventry-based initiative which specialises in training, volunteering and event management is in the running for a regional social enterprise award in recognition...