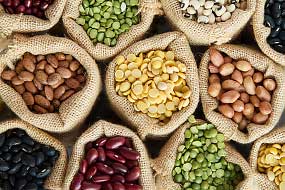 Coventry University is playing a key role in a new Europe-wide project to encourage farming systems to be less dependent on inorganic fertilisers and the fossil fuels needed to create them.

The university's Centre for Agroecology, Water and Resilience (CAWR) is part of the €5 million EU-funded TRUE project – 'TRansition paths to sUstainable legume-based systems in Europe' – which is working to develop sustainable farming systems and food chains based on legumes, which do not require nitrogen fertiliser.

Researchers from CAWR are working with 24 partners from 10 European countries as part of the Horizon 2020 programme, and will be carrying out research for the project from the centre's facilities at Ryton Organic Gardens.

The CAWR team will focus on investigating the potential of heritage bean varieties and how they can positively impact ecosystems, as well as exploring how legumes can help maintain soil fertility in organic greenhouse horticulture

Soil fertility is a particular issue in organic and low input greenhouse horticulture. The use of animal by-products such as blood and hoof or horn meal is common, but this raises ethical issues. Legumes in various forms can offer an alternative.

Legumes are a very special type of crop, and are a sustainable source of highly nutritious food and feed. Since they require no inorganic nitrogen fertiliser, we not only get efficiency savings but also improvements to soil quality and productivity when deployed in a modern crop rotation. The nitrogen demand of legumes is met naturally via a symbiosis with soil bacteria that is contained in legume root nodules.

Despite their benefits, legume-based systems have not been adopted in common farming practice, largely owing to the fact that their profitability is subject to debate. Pulses – which are part of the legume family – only grow on around three per cent of the arable land in the EU, making the EU highly dependent on imports of feed-legumes and fossil energy.

Coventry University has been given another global league table boost today by shooting up the 2018 QS World University Rankings.