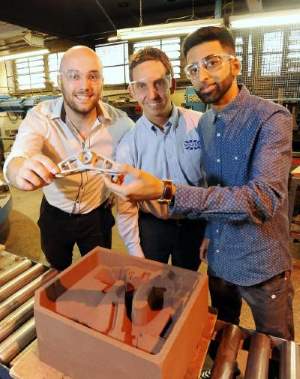 A chance partnership between Coventry-based manufacturer Sarginsons Industries and an aerospace student has led to a first class project being delivered that pushed the boundaries of aluminium casting and aerospace technology forward.

Sarginsons, which is the UK leader in complex sand and low pressure castings, was approached by Saif Arif to sandcast a bell crank component for a control column to connect wings on military Harrier aircraft.

The 23-year-old, from Nuneaton, re-designed the bell crank to demonstrate the component could be stronger and more efficient by hollowing out the product.

Sarginsons has a particular expertise in light-weighting automotive components and came to Saif’s aid by designing a solution that allowed a totally hollow aluminium casting to be delivered.

I came up with the idea of using design software to optimise a bell crank of a military aircraft. I looked into using CNC machining to create the component, but although Coventry University has a machine it was clear it couldn’t accommodate the design.

I thought outside the box and started approaching local manufacturing companies. Sandcasting was one of my initial ideas as it seemed to accommodate this complex design and I’d heard of Sarginsons, researched the company and called them.

I was seeing a dead end and needed some help, and thankfully Sarginsons was happy to help with the project and it went from there.

There were a few adjustments which I had to make to the original design, but then Sarginsons worked their magic and that was that.”

After conducting real time casting simulations with its Magma software Sarginsons was able to refine the design and manufacture a product that was 33 per cent lighter than other aerospace bell cranks – helping Saif to attain a first class mark.

To Sarginsons’ knowledge this is the first time modern hollow casting technology has been used in a Harrier jump jet and represents a whole new area of enterprise for the company.

I’m delighted with the final outcome. I managed to achieve a first for the project and it’s great to have helped create a network between Coventry University and Sarginsons hopefully this will be useful for each party in the future.”

Sarginsons has extremely strong links with academia as we currently work on R&D projects with six universities on behalf of a range of automotive companies and we welcomed the opportunity to support one of Coventry University’s brightest aerospace students.

We were impressed with Saif’s ingenuity and application and the component we helped him produce ended up being five times stronger than the original, and much lighter too. We congratulate him on his success and wish him all the best in his career.”