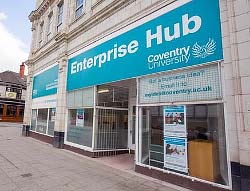 Coventry University has excelled in a in a social enterprise awards ceremony designed to showcase the higher education sector's talent and achievement in entrepreneurship, innovation and leadership.

CUSE was successful in the 'Innovation in delivery of support to Social Entrepreneurs' category, and the company's director, Keith Jeffrey, was honoured as a 'Social Entrepreneurship Champion' - with both awards being judged by a panel including representatives from HEFCE, Universities UK and Santander.

There was further success for Coventry University's community, as alumna Stacey-Jade Mason - whose start-up company aims to positively influence the life choices of young people who are at risk of victimisation and abuse - won an 'Outstanding Achievement' award.

Stacey's Coventry-based company, Creative Optimistic Visions, takes advantage of her expertise in protective behaviours to help individuals to identify what feeling safe feels like, increasing their self confidence and helping them to achieve a qualification via a creative outlet.

Experts from Middle East Technical University (METU) Turkey will be coming together with colleagues from the UK, at Coventry University, to understand and develop...

Universities in the driving seat for enterprising Midlands Engine growth