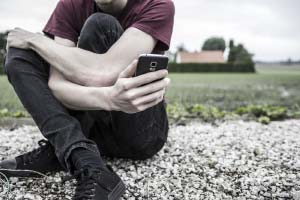 People who show characteristics of autism are more at risk of attempting suicide, according to a Coventry University study whose results are being presented to a United States federal advisory committee tomorrow.

Researchers found that people who exhibited higher levels of autistic traits were more likely to try to end their lives than people without the traits because they felt they were excluded from society, were a burden on friends and family, and because they experienced depression.

Previous research has already suggested a link between autistic people and an increased risk of suicide.

However, this is the first study to suggest those who have not been diagnosed with autism but had certain traits typical of autistic people were also more at risk of attempting suicide.

Academics say understanding how these factors are linked is vital in helping to reduce deaths by suicide – and that more research is needed in this area.

The findings coincide with the launch of an urgent appeal by UK charity Autistica calling on the autistic community to get directly involved in further research by signing up to its new autism research network, Discover – autistica.org.uk/take-part – which will link the local autistic community with the Coventry investigators as well as other top UK research centres.

The Coventry University study – published in the journal Autism Research – involved 163 people aged between 18 and 30 who completed an online survey which asked a range of questions to establish the level at which they showed characteristics of autism, depression and suicidal behaviour.

Autistic traits include social and communication difficulties, attention to detail and the tendency to have narrow obsessive interests.

It also examined interpersonal feelings which may be associated with attempting suicide, such as believing they do not belong or fit in the world, and that they are a burden on others.

The academics used standard tests and a psychological model to investigate associations between autistic traits, depression, feelings of not belonging and of being a burden, and suicidal behaviour.

The results suggested that those participants who exhibited higher levels of autistic traits were more at risk of suicidal behaviour during their lifetime.

Higher levels of autistic traits were also associated with increased vulnerability to experiencing feelings of depression, feeling they are a burden on others, and do not belong in the world, which may put them at more risk of attempting suicide.

The academics say the psychological model can be used to predict people who will exhibit suicidal behaviour – and once further developed could make a huge difference to creating effective assessment, support and treatment for people at risk of suicide.

The research was carried out by Mirabel Pelton as part of her thesis for her MSc Psychology at Coventry University. She is now working towards a PhD and is expanding her research on the topic.

These are life and death issues. Research to date has failed to understand the link between autistic traits and suicide but this study suggests that promoting social inclusion and independence could literally save lives.

Dr Sarah Cassidy, who supervised the research, will tomorrow (October 24) present it to the Interagency Autism Coordinating Committee (IACC), a US federal advisory committee, at a meeting in Rockville, Maryland, USA. She said:

This is a shocking wake-up call for society, when a significant section of the population feel that they don't belong in the world. As a society we urgently must do more to value neurodiversity. This could ultimately save lives.

We know mental health problems and suicide are a huge problem in autism but there is little high quality research to help us understand how we can improve services and the lives of autistic people.

In light of these and other deeply worrying findings, we are urging more people to join our new autism research network, Discover, that will link the local autistic community with top UK research centres such as Coventry University. The more we understand the causes, the better we can support all autistic people to live long, healthy, happy lives.

Autistica, together with its research partners, aims to recruit 5,000 autistic people, their families and carers to Discover by the end of 2017.

Rates of suicide “worrying” among people with autism, say experts

Suicide rates among people with autism in England have reached “worryingly” high levels, according to experts writing in the Lancet Psychiatry today.

America’s white working-class communities feel they are being kept in the “slow lane” of social mobility while other groups speed past, according to a year-long study by...

A mobile gratitude wall inspired by Coventry University research, which showed how encouraging people to write down what they were grateful for helped boost their...