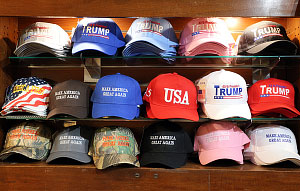 Report also finds definitions of white working-class are outdated, and calls for renewed efforts to build cross-racial harmony to avoid a crisis of division

America’s white working-class communities feel they are being kept in the “slow lane” of social mobility while other groups speed past, according to a year-long study by UK and US researchers into their social and political views.

Experts at Coventry University and the University of Illinois visited five cities across the US and spoke with over 400 people who identified themselves as white working-class, in an effort to understand their views on identity, race and immigration, and to delve beyond the familiar stereotypes.

Communities in New York City, Dayton (Ohio), Phoenix (Arizona), Birmingham (Alabama) and Tacoma (Washington) were interviewed and their thoughts captured during a period spanning part of the 2016 presidential race which heralded the most dramatic shift in political dynamics in recent US history.

Participants told the researchers that the ‘American Dream’ seems unattainable to them, and lamented negative changes they associate with increased levels of immigration and diversity, including feeling politically marginalised, culturally isolated and economically vulnerable.

And while very few interviewees talked in hostile terms about race and immigration – instead seeing acceptance of diversity within their families, neighbourhoods and workplaces as a lack of racism – they would often use “colour-blind” language that denies the existence of institutional racism.

The study’s authors found that:

The study also challenges the narrative that Donald Trump enjoyed the full support of white working-class communities during the presidential race, with many participants indicating that they found him the “lesser of two evils” in relation to Hillary Clinton – who they saw as representing the political elite – and found his language describing women and minorities unacceptable.

According to the report, while there is evidence in some regions of grassroots efforts to bridge divides, more needs to be done – against the challenging backdrop of reduced federal spending on community development and a hostile political environment – to increase the capacity and capability of organisations, events and individuals to build trust across communities.

It is clear from our study that white working-class communities believe their voices are not being heard – they feel disconnected, disrupted and left behind in the slow lane.

This study was about understanding these communities, and looking behind the negative narrative around them that often prevails in the media, particularly in relation to the success of Donald Trump.

For many, Trump represents the public voice of private disenchantment among these people. Yet there are as many people who disagreed with him, and it’s important that we recognise this diversity of views. There’s an assumption that the white working class is a homogenous group, but there’s depth and diversity that’s rarely given credit.

Professor Stacy Harwood from the University of Illinois’ Department of Urban and Regional Planning said:

The over-simplistic narrative around white working-class communities is problematic when it comes to building coalitions. Our project begins to identify some pathways and reframe the conversation.

There is interest, but the lack of capability to navigate some of the conversations around race is a major challenge, not just for the white working class as we found in this study, but for most white people. The consequences of not doing anything could further deepen the crisis as the country moves to being even more diverse in the decades ahead.

The full report – The Other America: White working-class views on belonging, change, identity and immigration – is available online.

City shoppers are being encouraged to buy goods and services from a range of not-for-profit businesses that ‘trade for good’ at a special pop up market in Coventry this...

Three West Midlands cities have won over four million euros to help the region's communities get the maximum benefit from migration and improve migrants’ and refugees’...