My research interests have grown out of a lifelong involvement with central and eastern Europe, principally Poland and Eastern Germany as well as a personal interest in creating experimental performances.

My formal research was primarily inspired by the fall of the Berlin Wall and its subsequent consequences, as well as a fascination for the history, cultures and atmospheres of Central and Eastern Europe.

My exploration in performance and installation of Mittel Europaische themes is inspired primarily by the urge to process historical change and its relation personal experience including family history.

My research into the affective, signifying and potential of sound emitting objects in performance and installation was initially inspired by an interest in the early European avant gardes, such as Da Da and Futurism. From 1996, specifically the neo-avant garde work of Robert Rutman with his sculpted steel instruments, the Steel cello and Bow Chime, whose biography and oevre embody the middle European traumas which exercise me. 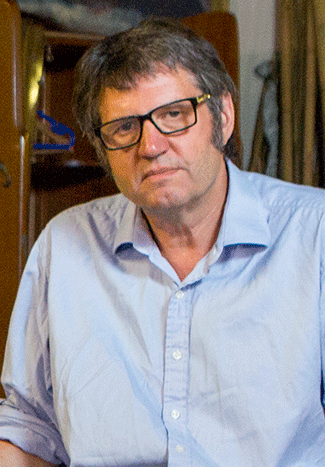 Born in Leeds in 1956 into an Anglo-Polish family; a powerful formative influence on me was the regular family expeditions behind the Iron Curtain to return to my father’s lost homeland. I was educated at Leeds Grammar School taking a BA in English and American literature at the Unversity of Kent in 1978. From 1979 I lived in West Berlin working as a taxi driver, while running artistic performance projects with absurd Theatre Group, Bogdan Club and travelling extensively behind the Iron Curtain. At the 1981 I performed the Edinburgh Fringe, with an adaptation of Stanley Kubrick’s masterpiece, 2001 a space odyssey. Performed on the back seat of a Hillman Avenger, they were described in the Glasgow Herald as “ the most imaginative group on the fringe”.

Following the fall of the wall, I returned to the UK, studying for an MA in European Cultural Policy and Management at Warwick University, where I graduated with distinction in 1993. My thesis “Goerlitz- a bridge to the East”, studied the use of cultural politics in the process o f German-Polish reconciliation in the border town of Goerlitz-Zgorzelec. This thesis formed the basis of Council of Europe run summer school into the new cultural political realities in the border areas in 1996 and was documented in Wesner, S., and Palka, A. (1997) ‘Challenges for Cultural Policy and Management in Central and Eastern Europe Symposium Proceedings’, which was held 1996 in Zittau, Germany.

I received a British Academy award for a PhD into post-communist cultural policies between 1995-1999. Simultaneously, I co-ran a successful Da Da-inspired cabaret in London, the Cupboard Club, described in London’s Time Out, as London’s “wierdest night out”. It was in this period that my academic work and artistic work began to merge, when on a research trip to Berlin I saw the work of Bob Rutman, which influenced me very deeply. In his work and person I saw a way of expressing artistically the middle European atmospheres, myths and traumas that I had been studying academically.  As a result, my interests focussed more intensely on live performance and I did not complete my PhD.

In 1999 I was appointed as a Lecturer in Performing Arts at Coventry University, where I deepened my research into artistic practice with the Steel cello and Bow Chime. At Coventry I have produced a body of performance and installation work with the Steel Cello and Bow Chime expanding into exploration and creation of other sound emitting objects as well as published critical and reflective writings as outlined below.