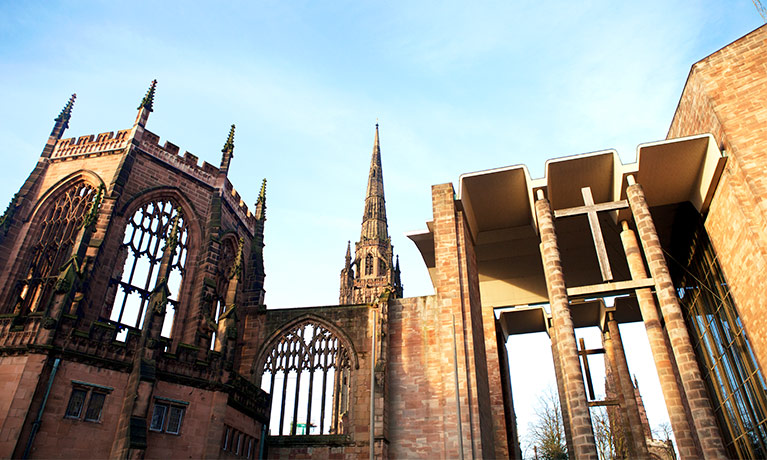 2016 marked ‘1000 years of Coventry Heritage’. We translate this as meaning it was is Coventry’s 1000th birthday, and it's never looked better!

In 2016, we celebrated ‘1000 years of Coventry Heritage’. At UnCOVered, we translate this as meaning today is Coventry’s 1000th birthday.  1,000 years old and you’ve never looked better!

We thought we’d give you a short Cov-centric history lesson, and take a look at how we, Coventry University, fit into this epic timeline.

Let's chart some of the key historical events that shaped the city of Coventry, turning it into the vibrant cultural hub it is today.

11th Century – The founding of Coventry 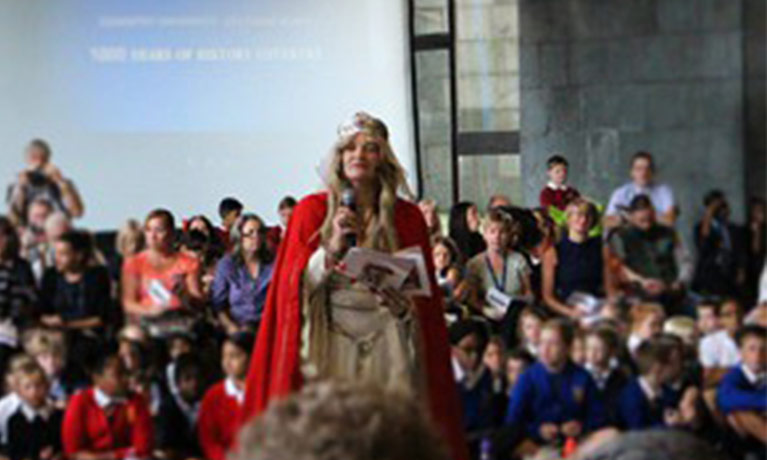 Little is known about Coventry prior to the 11th Century, but one documented event dating back to 1016 could be seen as the melting point that has helped shape Coventry’s history to this day!

In a bid to take control of England, King Canute and his army of Danes destroyed a Saxon nunnery in Coventry. From the rubble of said nunnery, rose a Benedictine monastery in 1043. The aptly named ‘Monastery of St. Mary’, was built by Leofric, Earl of Mercia and his wife Lady Godiva who dedicated it to St. Mary.

One little known fact about Coventry’s history is that Coventry has been home to not 1, but 2 castles in it’s time. The first castle dates back to the 11th Century, although it was razed to the ground in the 12th century, making way for the second.

Largely documented in Coventry’s history, is the story of Coventry’s two halves: the Prior’s half and the Earl’s half.

It was believed that Coventry was totally split, and had separate governments for each half, until incorporation in 1345. However, more recently it has been realised that Coventry appears to have always been ruled as one, but it’s incorporation as a city occurred to save it from splitting entirely.

You might have heard the famous story of a certain Lady Godiva? The deeply religious Countess of Mercia who, according to legend, rode naked through the streets of Coventry… but what drove her to do this?

Married to Leofric, the Earl of Mercia, Godiva was sympathetic to the people of Coventry who were mercilessly forced to pay an oppressive tax, ‘the Heregeld’.

Godiva pleaded with her husband to stop the tax, and legend tells that the Earl said in jest: “You will have to ride naked through Coventry before I will change my ways”. And lo, a legend was born!

*Cheeky historical tidbit* Through this legend, the phrase “Peeping Tom” was born. It’s believed that Godiva sent out messengers to ride through Coventry, insisting every man and his wife stay indoors. Everyone complied except for (you guessed it), local degenerate ‘Tom’.

14th Century – The Elephant in the room

Coventry and elephants?? Are we missing the link?

Well, elephants are said to represent ‘strength’. And the strength of the Elephant that carried a castle on it’s back could easily be compared to Coventry, the city which by this point in time, had already rebuilt a monastery and castle following devastation. Symbology game strong Coventry!

15th Century – Coventry Cathedral, an extraordinary place with a story you cannot ignore 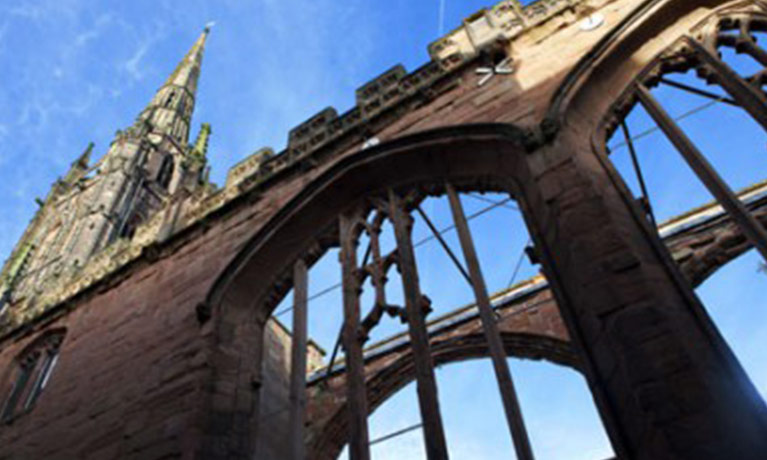 If you live, work or study in Coventry, then no doubt you’re aware of the magnificent Coventry Cathedral. But you might be surprised to know that the current Cathedral of Coventry is the third to have been built in the past 1000 years.

Despite Coventry being turned into rubble overnight, the very next morning a decision was made to rebuild the Cathedral into the Cathedral you see today. 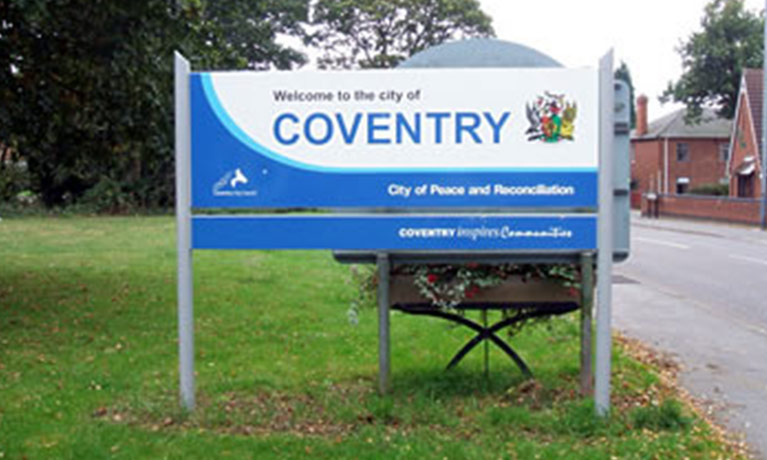 That old saying “sent to Coventry”, meaning to be completely ignored or cast aside from the group, is believed to originate (according to Historic Coventry) from around 1648.

“Oliver Cromwell sent many Scottish Royalist prisoners (who had been fighting for Charles I) to be imprisoned in St. Johns Church in Fleet Street. While exercising in the streets, it was said that the soldiers were completely ostracised by the strongly parliamentarian Coventry folk, hence; people who have been shunned in that way were said to have been “sent to Coventry”.”

Time didn’t actually begin in the 17th century, but it was during this time that Coventry’s watchmaking excellence began.

“Coventry was one of the main centres of watchmaking in England and several thousand people were employed in the industry.”

Although it wasn’t until the 18th and 19th centuries that Coventry was clocked as a centre for watch making excellence. It was in the 17th Century that, according to The Herbert, the first watch and clock maker in Coventry, Samuel Watson, made clocks for King Charles II and Sir Isaac Newton.

“The earliest example of organised healthcare in Coventry was in existence by at least 1793. The General or Charitable Dispensary was financed by charity alone, and was intended for those who had “such claims to respectability” that they should be saved from resorting to parish aid.”

That’s right, in 18th Century Coventry – healthcare was a luxury afforded only to the most respectable members of the community. Compare that to today, with our abundance of healthcare Public and Private – what a time to be alive!

19th Century – The Blueprint for modern day bicycles, and the foundation of Coventry University

In the later half of the 18th century, according to Coventry Transport Museum, The Coventry Sewing Machine Company received an order from Paris to make a number of ‘Velocipedes’, an early bicycle, popular in France.

This led to many independent bicycle manufacturers throughout Coventry, but none more famous than J K Starley, who developed the ‘Rover Safety Bicycle’ which went on to become the blueprint for modern day bikes.

But most importantly (to us!) the 19th C. saw the emergence of Coventry College of Design in 1843. This college forms the roots of what has become the Coventry University (ahem University of The Year, and 3 time Modern University of the Year winner) we know today!

20th Century – The city that rose from the ashes

We have already covered the devastation of the Saxon nunnery, Coventry Castle, and 2 of Coventry’s Cathedrals.

However, no event has ever shaken the city like the night of 14 November 1940.

This night is most unfortunately known as the Coventry Blitz; the night during World War Two that saw a German air-raid level Coventry to the ground, destroying many homes, factories, and of course, St Michael’s Cathedral.

We cannot leave the 20th century without mention of that famous afternoon in May 1987 when Coventry City FC beat the odds, and Tottenham Hotspur, to win the FA Cup in front of 96,000 football fans at Wembley Stadium, the club's one and only major honour.

It is safe to say, the last 1000 years have shaped Coventry into a city steeped in history and culture.

Starting in May of 2021, and lasting for a whole twelve months, culture will be celebrated in the city where movement began.

The university is located at the heart of Coventry and houses a rich and diverse community of staff and students from diverse backgrounds, it has a rich history and been part of the make-up of Coventry since 1843.

Staff and students are looking forward to Coventry being the City of Culture for 2021 and are planning events, undertaking initiatives, sharing information and history and celebrating the rich culture and diversity that is embedded our unique organisation.