Dr. Emma Vardy of the Centre for Research in Psychology, Behaviour and Achievement (PBA) is working with local schools to understand the impact of reading to a Pets as Therapy (PAT) dog. Research has suggested that reading books to a dog can improve children’s reading ability, and also confidence levels; this may be due to reading to a non-critical friend. To-date, little research has been conducted to measure the benefits. Therefore with local schools, the children will be completing a measure of reading comprehension and a measure of their self-esteem/attitudes towards reading before and after reading to a PAT dog. In comparing the before and after scores we can understand the potential benefits of reading to a dog. In addition to this we will also be talking to some of the children afterwards to find out what they thought. We are really excited to be working on this project with local schools and local PAT dogs and volunteers, and look forward to sharing our findings.

Professor Julia Carroll and Dr. Helen Breadmore have recently completed a project funded by the Nuffield Foundation comparing children with dyslexia and children with a history of repeated ear infections (glue ear). The report will be available shortly.

Our findings suggest that many children in school may have an undetected mild hearing loss, which would make it harder for them to access the curriculum. Current hearing screening procedures are not picking up these children, and we would advise that children have their hearing tested in more detail and more often, particularly if they are showing unexpected literacy difficulties. 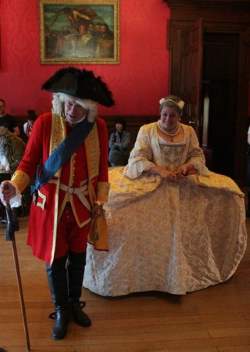 We have recently received funding to evaluate a project carried out by Historic Royal Palaces to enrich language and storytelling skills in 4 to 6 year old children. The children receive six visits to their classes from actors and storytellers, and become involved in the story of Queen Catherine and her cabinet of curiosities. They retell the stories and develop their own stories as well. The programme finishes with a visit to Kensington Palace where the children get to meet Queen Catherine. The programme is being carried out with children in three London schools with high rates of disadvantage and English as an additional language.

We are really excited to evaluate this project, because we have done plenty of work in the past showing that oral language is one of the most important skills in later successful reading. We also know that children from disadvantaged backgrounds are less likely to encounter complex vocabulary and extended storytelling, so this project may go some way towards reducing the gap in attainments shown by disadvantaged children.

We knew that it would be hard to measure some of the skills that might be affected by this programme. The children are at the very earliest stages of learning to read, so their reading is more about decoding single words than understanding stories. In addition, we wanted to measure their ability to tell stories as well as to understand that. To do that, we have used a test known as the ERNNI (Expressive, Reception and Recall of Narrative Instrument). Children have to look through a wordless picture book and ‘tell’ the story from the pictures. We then assess how much they understand of the story and how much they can remember after a short delay. We believe that the Curious Stories programme will help children to understand, explain and retell stories. We also believe it will help their vocabulary and writing skills, so we’ll be assessing those as well.

At present we have seen the children before they started the programme in October, and we will go back and see them at the end of March. All fingers crossed the programme has made a difference!

We have recently completed a trial of the online reading support tool (ABRA), funded by the Education Endowment Foundation. Abracadabra (ABRA) is a 20-week online literacy programme composed of phonic fluency and comprehension activities based around a series of age-appropriate texts. Four 15-minute sessions per week are delivered by a teaching assistant (TA) to groups of three to five pupils.

We’re pleased to say that ABRA (either delivered online, or by paper) had a positive impact on the reading skills of the year 1 children we worked with, and we are now in discussions with the Education Endowment Foundation with regard to ‘scaling up’ the intervention to allow more schools to use it.

More details of the project can be found on the Education Endowment Foundation website.

The Literacy Development group are passionate about developing new perspectives of learning to read and write through research in various studies. Today, the team will be at a local school in an interactive session.

Outside of research, there is much enthusiasm for World Book Day at Coventry. The CU Book Club meet weekly to discuss novels, put on creative workshops and have a weeks worth of activity going on today.