Breakfast Briefing on “The Mediterranean Migration Crisis and Refugee Resettlement" 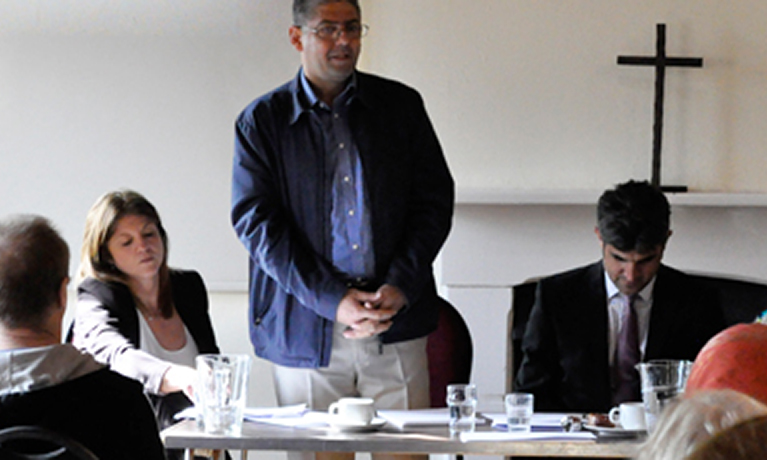 On the 16th of September 2015, the Migration, Displacement and Belonging Research Group at the Centre for Trust, Peace and Social Relations (CTPSR) joined forces with the Coventry Refugee and Migrant Centre (CRMC) to host the first in a series of Breakfast Briefings which provide a forum for discussing key debates in international migration and understanding the implications at a national and local level.

The event brought together stakeholders from across Coventry and further afield to discuss current migration trends and issues in the Mediterranean and to consider the national and local implications on politics and society here in the UK. As public and political concern has increasingly built around this issue, the topic was extremely fitting to the current climate. The discussions for potential policy solutions were full of passion, willingness and hope.

Over 430,000 people this year have made the risk-ridden journey across the Mediterranean and Aegean seas to seek safety, but it is not always clear why people are crossing Europe and how they come to take particular routes at different points in time.

When considering the scale and driving forces of the crisis, it is clear that the implications are far greater elsewhere in the world than in Europe, with the majority of those fleeing conflicts residing in neighbouring nations, most noticeable Jordan, Lebanon and Turkey in the case of the Syrian refugee crisis. Whilst initial journeys may seek immediate safety in nearby locations, people often subsequently continue their journey to flee further persecution or find longer term security. This is particularly evident in the case of Turkey where current legislation provides refugees with temporary protection but no legal status or rights to access mainstream employment, education or healthcare systems. As a result the use of terms including ‘refugee’ and ‘economic migrant’ can be misleading: these terms are complex and fluid as people can, and increasingly do, move between categories depending on their situation and the potential to build a new life, create a livelihood and obtain long term security in a particular place.

This international perspective is important when reflecting on the UK’s response and future involvement in providing durable solutions.  The British government recently announced that it would provide an opportunity for up to 20,000 Syrians refugees to be resettled from refugee camps in Jordan over the lifetime of this parliament, a relatively modest step and one which does nothing to address the situation of hundreds of thousands of people who have already moved to Europe. Coventry is one of just a handful of local authorities in the UK which has agreed to be part of the Vulnerable Persons Relocation Scheme, resettling 78 Syrian refugees in the city to date. The local response to date has been welcoming, supportive and inclusive drawing on a high level of community support and committed community leadership teams. It became apparent during the course of the event that there are many organisations and individuals in Coventry that are keen to maintain momentum to ensure that support for the scheme continues.

There continues to be ongoing disparity in the distribution of refugees across EU nations, making for isolated and varying national responses. More negotiation, discussion and cooperation within the EU is needed to respond to the crisis with solidarity across member states. The event provided an opportunity to explore these issues and some of the longer-term issues that need to be considered including the impact of development and foreign policies and the provision of more safe and legal routes to Europe which would reduce the demand for the high risk journeys which are currently made in such high numbers.  EU responses cannot continue to be fuelled and driven by human tragedy.

CTPSR and CRMC would like to thank all those who contributed to the success of this first Breakfast Briefing and all those who attended to take part in the discussion. The event was chaired by Sabir Zazai, Director of CRMC. Speakers included Professor Heaven Crawley, Chair in International Migration at CTPSR, Maurice Wren Chief Executive of the Refugee Council, Peter Barnett of Coventry City Council and Abdulmunem Kamal Al Homsi, a lawyer from Syria who arrived in Coventry with his family in 2014.

CTPSR and CRMC have produced a briefing paper on ‘The Mediterranean migration crisis and refugee resettlement’ which can be downloaded here. The Migration, Displacement and Belonging research group at CTPSR has recently secured funding from the ESRC to undertake comparative research in Italy, Greece, Malta and Turkey with migrants and refugees who have crossed the Mediterranean into Europe. You can read the ESRC press release here. More information about the project can be found here.

If you would like to be kept informed about future events in this series please send your details to Dr Simon McMahon (simon.mcmahon@coventry.ac.uk) who will be able to add your details to our mailing list.