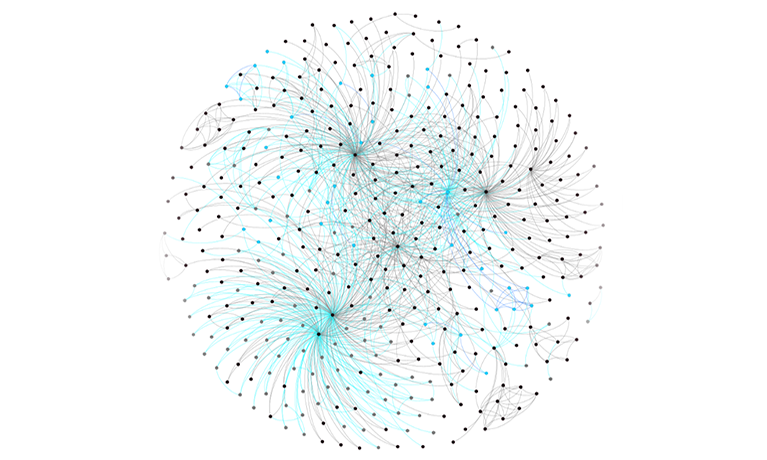 Image by PhD student Maddy Janickyj: The social network of characters and interactions between them harvested from Irish mythological tales with black representing male and blue representing female

In collaboration with the Irish Post newspaper, Rathcroghan Visitor Centre, and Story Archaeology in Ireland, Coventry University’s Centre for Fluid and Complex Systems is running an art competition celebrating women in Irish mythology and folklore.

The initiative stems from interdisciplinary research that looks at social networks described in epic narratives. These mathematical investigations found that women are better represented in Irish mythology than they are in other stories. The project, titled ÉIRÍ (Evoking Ireland’s Resilient Female Icons), means 'stands up, arises, soars, ascends' in the Irish language.

Project lead, Professor Ralph Kenna, who is Irish himself, advocates that if the country’s rich mythology were used for Ireland’s iconography, instead of predominantly male neoclassical sources, a more gender balanced representation could be achieved.

Professor Kenna goes on to say that "the neo-classical male “river-god” heads used in Irish passports were created for a colonial age and the predominantly male imagery is unsuitable for Ireland's modern, equal society.

"The same male Neptune-like imagery was recently used for a statue to represent the River Shannon in Athlone, a town in the centre of Ireland, despite the river being created by a woman in Irish mythology. In her inspirational story, the Irish “goddess” sought knowledge for her people causing a well to rise and create the river as a source of plenty."

The oral tradition of Irish mythology dates to pre-Christian antiquity; pre-catholic, pre-protestant and prior to all the sectarian divides of the last few hundred years, and women are better represented there than in many other epic narratives.

By inviting members of the public to submit original art in any form as part of the competition, the project looks to demonstrate artistic talent representing Ireland’s identity in a fair, all-inclusive way.

The deadline for adult entries is Halloween - 31st October 2022, an important date in Ireland’s mythology and folklore, while children have till the solstice - 21 December 2022 to submit their entry.

Running parallel to the art competition is a participatory research project aimed at exploring how people take - or could take - inspiration from female figures in Irish mythology and folklore. What do such iconic women mean to you? Have they inspired you or could they inspire a future generation? Or would you simply like to learn more about them?

In addition to submitting artwork, Professor Kenna invites the public to send in their thoughts on the inspirational roles of female figures in Irish myth and folklore. The project is open to everyone, from anywhere in the world.

Find out more about the competition and submit artwork and thoughts to: editor@irishpost.co.uk and Professor Ralph Kenna.