A renowned British aerobatic pilot competing in the Red Bull Air Race world championship has been given a boost by cutting edge technology developed by staff and students in Coventry University's aerospace department.

Nigel Lamb, principle pilot for the Breitling Racing Team and reigning world champion of the Red Bull contest dubbed the 'F1 of the skies', is working with academics and students from Coventry's aerospace technology course to devise an intuitive way to analyse his race performance.

Final year aerospace technology student Anthony Murira and flight safety researcher Dr Mike Bromfield teamed up earlier this year with Nigel and his son Max – himself a Coventry University engineering graduate – to explore how the University could help support Nigel and the Breitling Racing Team. 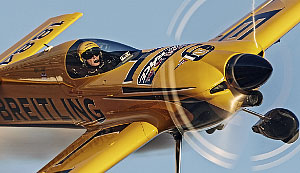 The Coventry University duo then developed specialist software to assist Max, the team's track analyst, in producing a detailed evaluation of Nigel's performance during the races, which involve piloting aircraft through a slalom course of 'air gates' at death-defying speed.

Ace pilot Nigel – whose aerial antics have wowed spectators across the globe – has already felt the benefits of the Coventry University collaboration, with the analysis software helping him to a solid start in the opening round of the 2015 season in Abu Dhabi.

Nigel is now preparing for the second round of the world series which is set to take place in Chiba City, Japan, in May, and will once again be taking advantage of Coventry University's technical support as he bids for his first win of the season.

Having Max input all of our data into Anthony's software and very quickly produce an evaluation of my actual flying in comparison to the race lines I was aiming for has been a huge boost to our competitive edge. Given that we are trying to fly along an invisible line in three dimensions makes this a huge challenge, and the results so far have been really exciting and rewarding.

Red Bull air racing presents a unique and challenging environment for both pilots and engineers alike, so we're thrilled to be working with Nigel and his team to help give them an edge in this exciting competition.

It's a particularly good opportunity for Anthony who has been able to get stuck into this real-world project as part of his degree. We're looking at things like flight path analysis, flight data monitoring and human factors – all of which we have expertise in at Coventry – so for Anthony it's valuable exposure to genuine industry challenges, with the thrill of the competition thrown into the mix.

It's been fantastic working with the Breitling Racing Team and seeing how a professional, competitive outfit like Nigel's operates. To be able to put the skills I'm learning on my course into action, particularly to provide real and detailed performance analysis for a top-flight air race team, is a great experience.

A lifestyle initiative set up to improve the health of women in an area of Coventry has been heralded a major success by organisers and participants.

Coventry University's recently launched National MBA in Cyber Security has been highlighted in a House of Commons debate this week as a valuable development in efforts...

The UK's sporting health is facing serious risks if the government does not do more to boost investment and put in place long term plans to preserve its competitive...