“Muscles and money”: What photos of men taken covertly on the London Underground say about modern day attraction 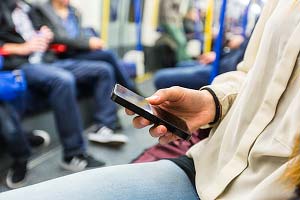 People still desire the traditional masculine values of muscles and money in the men they find attractive and have not moved on from long-established gender roles, according to new research.

The study by academics at Coventry and Aberystwyth universities challenges current thinking about feminism and how masculinity is portrayed, and instead suggests that white, male privilege is still an attractive quality in men for many straight women and gay men.

The researchers used the TubeCrush website as the focus of their study, collecting data about the types of images of men posted on it over a three year period from 2014.

TubeCrush is a site in which commuters upload photographs, taken covertly, of attractive men travelling on the London Underground. Other website visitors then rate the men, who don’t know their picture has been taken or uploaded to the site.

The researchers say their study of the entries on the site quickly revealed that both straight women’s and gay men’s desired particular types of men.

Despite London being a multicultural city, there was little diversity in the men featured, with most of them being white.

In the photographs there was often an emphasis on men’s muscular biceps, pecs and chest; the body parts which suggest physical strength.

There were also many references to this – and the men’s estimated sexual prowess - in the comments posted alongside the images.

As well as indicators of physical and sexual power, many symbols of disposable income and wealth were often focused on, such as smart suits, watches and phones.

There were fewer images showing other representations of masculinity, such as fatherhood, and more emotional and awkward characters typical of so-called lad-lit.

The academics said that public transport – in this case the Tube – has now become the space where gender politics is decided.

Private desires are now being made public as social media is being used to reflect who people fancy, they add.

The researchers say the site represents a form of reversal of gender roles by suggesting that taking pictures of unsuspecting men on the London Underground could be understood as a powerful act in a society where men have historically held ownership over women’s bodies.

The study was published in the journal Feminist Media Studies.

From smart-suited City workers to toned gym-goers flashing their flesh, the men featured in the photographs on TubeCrush show that as a culture we still celebrate masculinity in the form of money and muscle.

They are marking the middle-class, wealthy, mobile and sexually powerful male body, not as a political one as feminists intend it to be, but one that should be actively desired.

This celebration of masculine capital is achieved through humour and the knowing wink, but the outcome is a reaffirmation of men’s position in society.

It’s a problem as because although it appears as though we have moved forward, our desires are still mostly about money and strength.

Work has begun on a clean transport lab on Coventry University’s Technology Park, heralding the start of a £30 million collaboration between the university and...