Films addressing the increasing problem of food poverty in Coventry and how the farming industry is preparing for Brexit will be screened in the city.

The two topical productions will be shown for free over the coming weeks as part of a collaboration between Coventry University and a range of local organisations. They will each be followed by a discussion on the issues raised by the films.

What’s Eating Coventry? explores the issues of poverty, social justice and the growing number of people who are struggling to eat well in Coventry.

It was made by eight members of the Coventry Men’s Shed group, who produced it will help from academics at the university’s Centre for  Agroecology, Water and Resilience (CAWR).

In Our Hands highlights the growing movement of farmers and food workers who are working towards a fairer food system, ahead of the UK’s departure from the EU.

It has been produced by the Landworkers’ Alliance, an organisation that supports small-scale food producers.

The screenings have been timed to coincide with the Government's Open Consultation on the Future of Food, Farming and the Environment which runs until 8 May.

In Our Hands will be screened at 7.30pm on Wednesday 21 March in The Tin Music and Arts venue at the Canal Basin in Coventry.

We hope these films will get people thinking and spark debate about the importance of both local and national food issues in the context of the UK's looming departure from the European Union. These are not just topics that affect farmers in fields far from your home, but they are having an impact on people’s everyday lives right on your doorstep in Coventry.”

Rebecca Stevenson of Five Acre Community Farm, who is a West Midlands representative of the Landworkers’ Alliance, said:

Brexit will mean that the way the UK supports agriculture will fundamentally change. It could give us a chance to do things differently, and we are hoping that people from a wide range of backgrounds will come along to watch the films and give their point of view on the future of food in Coventry and the country as a whole."

We wanted to explore the bigger picture with the growing number of people who are struggling to eat well in our city. The film explores some of the ways that communities are responding to the issue of hunger and food poverty, offering new insights and hope for the future.”

The screenings are a collaboration between the West Midlands Chapter of the Landworkers' Alliance; the Coventry Men's Shed group; the Feeding Coventry network; Five Acre Community Farm; and the Centre for Agroecology, Water and Resilience at Coventry University.

For more information about the screenings visit: http://www.peoplesknowledge.org/filmscreening/ 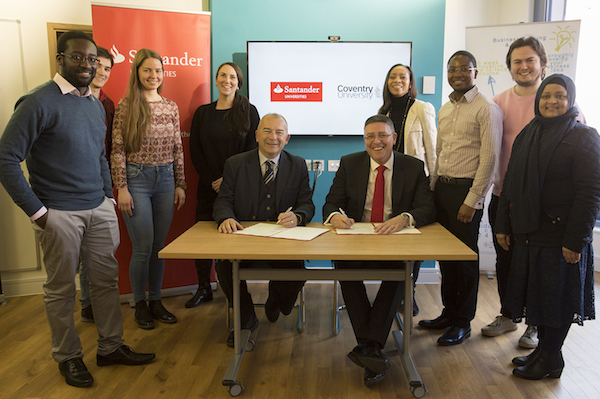 Coventry University students and staff will benefit from a new three-year partnership with Santander which will provide financial support for international and...

A group of Coventry University chartered manager degree apprentices have become the first ever to complete the new qualification.