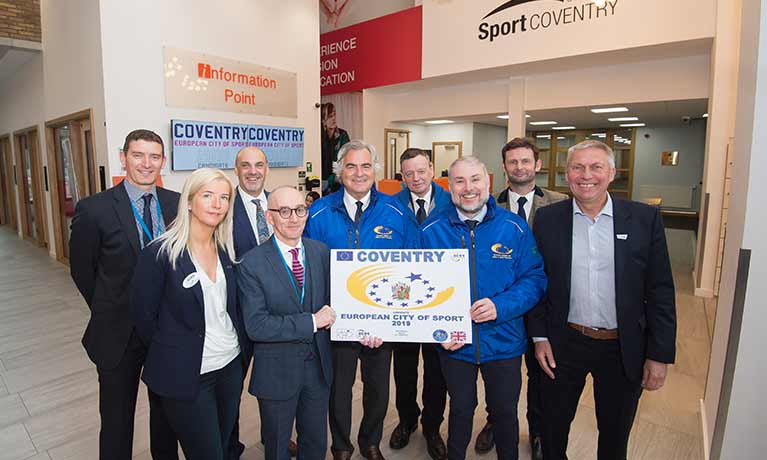 Coventry has been named as the UK’s European City of Sport for 2019.

The title has been awarded by European Capitals and Cities of Sport Federation (ACES Europe) following a successful bid by the city council – supported by Coventry University, among other partners – and will mark a celebration of all aspects of sport and well-being across Coventry.

The judges – who visited the city last month and spent time in the university’s Science and Health Building – were impressed with Coventry’s ‘exemplary sports policy’ and its aims of ‘health integration and respect’, which are the main goals of ACES Europe.

An important part of the year will be to celebrate the opening of the new water park in the city centre as well as the new 50m pool at the Alan Higgs centre.

The year will also focus on encouraging more young people – especially those that live in disadvantaged communities – to enjoy sport and lead an active lifestyle. This will build on the work that’s already achieving success thanks to projects like ‘In It Together’ and ‘Go Swim’ which are seeing people across the city return to sport and physical activity.

European City of Sport 2019 will be a special year for our city, and the perfect build up to City of Culture in 2021, with investment in community sports programmes and grants and huge investment in new sporting facilities – a £36 million waterpark with gym, health spa and squash courts and a new 50m swimming pool at the Alan Higgs Centre.

We already do lots to encourage our residents to be active and healthy and we will make sure that we work with partners throughout 2019 and beyond to encourage as many people as possible to get active. I’d like to thank the judges for their fantastic comments and all of our partners and local sports clubs who helped us get this win. I’m looking forward to a wonderful year with something for everyone.

A city that helps people to build sport and movement in to everyday life will be a better place to live and that’s what I want for my city.

Securing European City of Sport status is a fantastic achievement and a great opportunity for the people of Coventry, including our students and staff. As a university we’re proud to have played an integral role in supporting the bid.

This achievement not only builds the city’s prestige as we head towards City of Culture status in 2021, it also builds on our university’s own ambitions for sport, exercise and wellbeing for our students, staff and the people of Coventry more widely.

European City of Sport will bring together a great year of celebration – showcasing the best of what the city already does, attracting sporting events to the city and supporting grass roots sports clubs in communities.

Part of the programme for the year includes a new community grants fund to work with grassroots sports clubs and communities and also creating a number of new satellite sports clubs for 11-19 year olds.

The judges were welcomed by members of the Coventry Sport Network and a range of local sports clubs and partners.

A full programme of activities and events is being developed by all the partners in the city and will be available at www.coventry.gov.uk/cityofsport2019.

Having completed a rigorous assessment process I am delighted on behalf of ACES Europe to be welcoming Coventry into our Europe wide network of sporting destinations. Their successful bid means that the city will now hold the prestigious title of European City of Sport in 2019.

We are supremely confident that this will bring with it an incredible celebration of sport in the city, showcasing Coventry’s many unique and exciting sporting assets and its strong tradition of both participation and spectator sport.

Not only will the award have far reaching benefits for the entire city, but designation as European City of Sport in 2019 will also provide a fantastic platform for the city as it builds up towards 2021 and its year as UK City of Culture

The announcement that Coventry has been granted European City of Sport in 2019 gives me great pride. It recognises the hard work that we’re all doing in Coventry and gives real credit to all those organisations making a difference on a day to day basis be it the new sports facilities being developed or the projects that are getting people active.

Coventry is having a big impact on people and this award further recognises the many achievements the city has to celebrate. I have seen some big changes to our city but I’m most inspired by local people who make changes to their lives through sport and physical activity. Let’s make 2019 a great year and congratulations to all those that helped ensure we won the title of UK European City of Sport

Our sports strategy, which builds on the wonderful legacy of London 2012, is helping us to ensure that everyone in Coventry has access to high quality and affordable facilities whilst giving residents as much support as possible to become active.

A choreographer and academic will showcase her innovative work as part of a ground-breaking virtual reality exhibition.

Coventry University’s call for families to trial its new healthy eating app has received a vote of support from one of the food and nutrition industry’s leading voices.