Coventry on shortlist for 'University of the Year' award 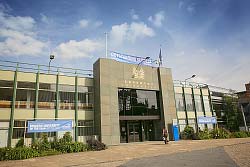 Coventry University has been shortlisted for the 'University of the Year' accolade in the Times Higher Education magazine's prestigious annual awards.

The University is the only institution in the West Midlands – and the only modern university – to have been nominated for the award, and is on the shortlist alongside five other universities from across the UK.

The awards – which are in their 11th year in 2015 – are intended to showcase the pioneering spirit, adaptability and quality across the higher education sector, and the 'University of the Year' title is the awards' flagship accolade which singles out one institution whose achievements and performance make it stand out in the industry.

Winners will be announced at a ceremony on Thursday 26th November in London, with politicians and senior industry figures from all corners of the country in attendance.

Coventry's nomination for the award follows a year of success which has seen a dramatic rise into the UK's top 15 universities in the Guardian University Guide – leapfrogging several Russell Group institutions in the process – and which saw the university voted top for personal development in the National Student Survey 2015.

Coventry is also the reigning 'Modern University of the Year' in the Times and Sunday Times Good University Guide, a title it has held for two consecutive years.

It's an excellent achievement for Coventry University to be shortlisted for the Times Higher Education's 'University of the Year' award amongst such strong competition in the sector. It's also a testament to our impressive forward momentum both at home, and in a global context, that Coventry continues to be recognised in this way within the industry and also outside it, and we remain hopeful and confident that November's awards ceremony will bring further good news for our staff and students.

The achievements of our universities, which transform students' lives and carry out pioneering research day in, day out, deserve to be recognised, and over the last decade the Times Higher Education Awards have become one of the sector's most hotly anticipated events. This year, the 11th year of the awards, we had more entries than ever before, and are delighted to have such strong shortlists, highlighting the strength of universities the length and breadth of the country.

Satisfied students at Coventry University have voted their place of study best in the country for personal development in a newly published league table.