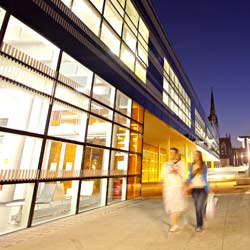 The university has secured 15th spot overall – a rise of 12 places from last year – ranking ahead of a number of Russell Group institutions to achieve its highest ever listing and cement its position as the country's leading modern university.

Coventry has also moved ahead of several competitor universities in the Midlands for the first time, including Aston University and the universities of Birmingham, Leicester and Nottingham.

In today's newly published guide, Coventry University is ranked top in the UK for the percentage of final-year students satisfied with feedback and assessment by lecturers, and is second only to the University of Oxford for its teaching quality score†.

Seven of Coventry's subject areas are ranked in the country's top 10, including its courses in the film production and photography and hospitality, event management and tourism categories, which are second overall.

Whilst we don't define ourselves by league table positions, they are a tangible external demonstration of our achievements and this result is a fantastic accolade for the hard work of the staff of Coventry University.

The metrics used to evaluate league tables can often be weighed against less traditional institutions, but this guide positions us on an equal footing with a number of universities widely considered to be among the most prestigious in the country. This success underlines that we are continuing to turn higher education on its head and break down customary misconceptions.

Our approach to higher education is continually evolving. Through our central campus, Coventry University College, London campus and recently announced Scarborough models, we're underlining that first-class education is not constrained by boundaries and can be accessed by all.

Throughout the Coventry University Group, our focus is on giving our students a top class experience across all aspects of their academic life through our innovative programmes of teaching and learning, excellent placement opportunities and a substantial investment in our infrastructure and facilities.

Our commitment to providing a high-quality experience for our students, our growing reputation for research excellence and our links with industry are helping to bolster Coventry's reputation as one of the best places in the UK to study, which is reinforced by these league table results.

Coventry University has today been awarded one of the most coveted accolades in UK business in recognition of its international growth and success over the past six...

Boost for Coventry University in first major league table of 2015