A third-year fashion student from Coventry University has finished ahead of up and coming talent from across the country to land a top award at a major industry event.

Safa Tayebi-Jazayeri has taken the title of ‘Young Designer of the Year’ at the Clothes Show Live 2014, which took place at the NEC in Birmingham last week. Safa is the second winner of the award to come from Coventry University, following in the footsteps of former student Curtis Li who claimed top spot in 2012.

Safa, originally from Iran, was one of three students from Coventry to be nominated for this year’s best young designer accolade. The university also had three finalists in the ‘Young Journalist of the Year’ category and its strong showing comes just over a month after graduate Kamilla Jones won best young designer at the Midlands Fashion Awards.

In a further boost for its standing in the fashion world, the university also won the Clothes Show’s best stand award for its 'CovMart' fashion supermarket display, inspired by the Chanel Supermodel Supermarket for its Fall/Winter collection at Paris Fashion Week.

All three entries for the young designer category at the Clothes Show Live 2014 were supported by the Coventry Drapers’ Guild, which ensured the students could access the latest industry fabrics for their work. 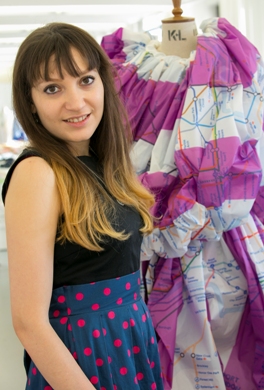 The brief for the young designers at this year’s Clothes Show Live was to put together an outfit which would bring to life the style of a leading fashion city such as London, Paris, New York or Rio and which was inspired by the themes of the So…? fragrance, the competition sponsor.

Safa wowed the judges at the show with her vibrant London dress design which incorporated the colours of the So…? perfume rage alongside a print of the capital’s iconic tube map. Safa’s efforts saw her rewarded with a £1,000 prize, a week’s work experience with a leading British fashion designer and the chance to see her outfit on the catwalk.

Having spent the summer working with chic womenswear label Dancing Dolls UK, Safa is looking forward to the opportunities that winning the title has afforded her, particularly the chance to work with one of the country’s leading designers. Safa hopes to gain more experience in her final year with her ultimate ambition on leaving university to start her own label.

I’m thrilled to have won the young designer title. The Clothes Show Live is such a prestigious competition - a major event in the UK fashion calendar – so it’s given me a tremendous boost. I was up against some really talented people, including those on my course at Coventry University of course, so it was great to come out on top.
I have to pay tribute to the fashion team at the university as well. I couldn’t have got this far without their expert tuition and support. Now, having won the title and with the experience and skills I’ve gained here in Coventry I’m looking forward to making a mark on the fashion scene.

The Fashion team are absolutely delighted for Safa. She thoroughly deserves her award but we’d like to congratulate our other students who made it to the final and just missed out. They’ve all done brilliantly.

Coventry University students continue to perform superbly in fashion contests like this. In fact, we’ve had finalists in Clothes Show Live events for the past six years, including one previous winner.

Our students are actually the best possible advertisement for our courses. Anyone looking to make a splash in the world of fashion just has to look at how well we do at industry shows and competitions. Coventry is definitely the place to be for up and coming designers!