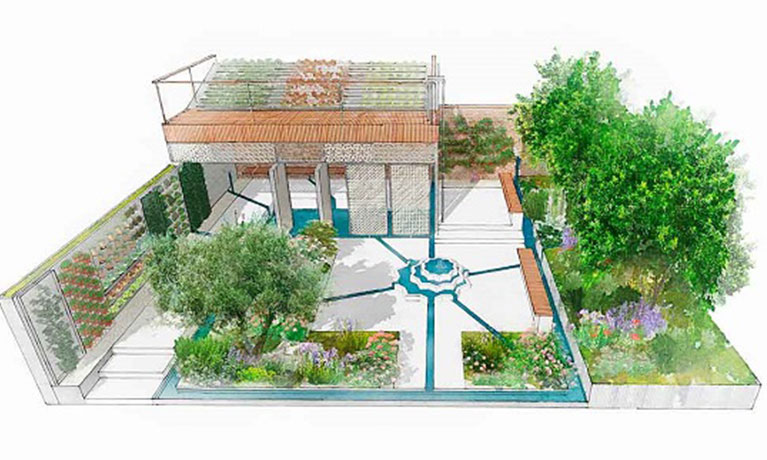 A ‘refugee camp garden’ inspired by a project to improve conditions for families forced to make the camps their homes will feature at the 2018 RHS Chelsea Flower Show.

The garden was designed with the help of refugees living in the Domiz camp in Northern Iraq and celebrates how the area’s residents make the most of the harsh living conditions and difficult landscape by growing fruit, vegetables, trees and flowers.

It is the result of a partnership involving the Lemon Tree Trust (LTT) and Coventry University’s Centre for Agroecology, Water and Resilience (CAWR), which work together across Iraq, Jordan, Syria and Uganda.

CAWR has provided technical support to the organisation since its launch in 2015 and the university’s Dr Andrew Adam-Bradford is the LTT’s chief technical officer.

The partnership has seen more than 2,000 trees planted around the Domiz camp, increasing access to desperately-needed shade and improving air quality; has handed out seed packets to encourage refugees to plant fruit, vegetables and flowers; and organised two popular garden competitions among the camp’s residents.

The gardens, trees and plants are used to promote food production and well-being; create shade in areas where there was none previously; and also bring a range of other environmental benefits.

The Chelsea Flower Show garden, designed by Tom Massey and built by Landscape Associates, features the type of drought-tolerant plants often grown in Northern Iraq; fig, lemon and pomegranate trees; and other edible produce and herbs that are regularly used in cooking in the region.

Water channels and pools will reflect the importance of reusing waste kitchen water for irrigation in refugee camps.

During the flower show next May, a video link will connect the garden with Dr Adam-Bradford, who will be working at the Domiz camp at that time.

“Refugee camps are grim places. The people living there have gone through things you can’t even imagine and the conditions are really tough. But there are simple things we can do to transform these harsh environments into green productive areas.“We have already seen the impact this work is having on people’s lives. Some of the gardens created by refugees are amazing. There’s a real sense of pride about them and they really help raise aspirations.“This show garden at the Chelsea Flower Show gives us a fantastic platform to reach a wider audience with the work we are doing in Domiz and elsewhere. We hope people attending the flower show will enjoy its beautiful surroundings but also really stop to think about the difference these gardens can make to refugees’ lives.”

The report by the university's Centre for Trust, Peace and Social Relations aimed to build up a picture of the challenges facing Syrian first responders, how they...

A selection of books which address important issues surrounding the world food crisis are to be launched by Coventry University academics this month.