A £1 million project to digitise BT's historical collection of photos and documents is set to bring 165 years of UK telecoms heritage to the public's fingertips today with the launch of an interactive online archive.

Jisc, who provide digital services for UK education and research, has funded Coventry University to team up with BT and The National Archives to create a searchable digital resource of almost half a million photographs, reports and items of correspondence preserved by BT since 1846.

The remarkable collection – which is recognised by UNESCO and Arts Council England as being of international importance – showcases Britain's pioneering role in the development of telecommunications and the impact of the technology on society, and will be freely available under a Creative Commons licence to encourage sharing and the use of the material in education curricula and research.

Users from anywhere in the world will be able to log on to www.bt.com/btdigitalarchives and explore 50 terabytes worth of images and documents detailing how Britain laid the foundations for global telecommunications, including the first telephone exchange in 1879 and the Queen making the first automatic long distance telephone call in the fifties.

Further highlights from the BT digital archives include: 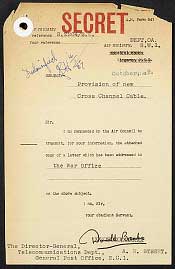 The project and its new website – which has been built by Coventry University's Serious Games International in collaboration with BT – aims to demonstrate the impressive breadth and depth of the archive, and to highlight the positive impact that telecommunications has had on social issues such as gender and race equality in the workplace.

The organisations involved expect the archive to appeal to a wide range of audiences including teachers, students, researchers and the general public, who for the first time will have easy access to an archive of cultural and technological significance to the UK.

It is a great pleasure to be able to launch the BT digital archives. Teams of experts from across the partners involved have worked together to produce an extraordinarily rich and important online archive. It's a magnificent achievement.

The BT archive documents over a century of the achievements of British telecommunications engineers and scientists in pushing the boundaries of communications technology. I'm constantly fascinated by the photographs and documents in the archive – it's fantastic that the public can now enjoy it all too.

Our renowned expertise in creating and preserving digitised records ensures that this important collection is accessible to more people now and in the future.

We're very proud at Jisc to have funded the digitisation of this internationally recognised archive. The strength of this project lies in a partnership that goes beyond the higher education sector and which has made hundreds of thousands of digital resources openly available for anybody to enjoy. At the same time, the academic team has produced fascinating case studies which show how digitised archival material can be used to explore new avenues both in research and teaching in a wide range of subjects, from design to linguistics and cultural studies.

A new digital lab based at Coventry University's Technology Park is offering help to West Midlands SMEs to integrate the latest technologies into their business and...

Two lecturers at Coventry University are being awarded a prestigious National Teaching Fellowship from the Higher Education Academy (HEA) today in recognition of their...

Coventry University has made another leap up the league tables with a rise of 13 places in the Guardian University Guide 2014 national rankings, marking the institution...