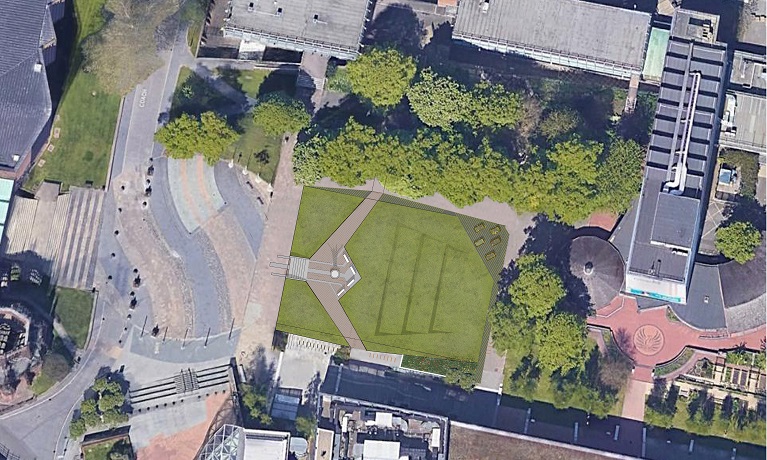 An artist's impression of the landscape garden

A Phoenix Tree is set to rise from the demolition of the Alan Berry building as Coventry University pays tribute to the city’s history.

The university has commissioned Blitz survivor George Wagstaffe to create a sculpture that will take centre stage in a new peace garden.

Like George’s other famous city centre works – the Naiad, now based in the Upper Precinct; and the Phoenix, in Bull Yard, off Hertford Street – the new bronze Phoenix Tree sculpture will explore themes of death, rebirth and resurrection, inspired by his experiences of surviving the bombing of the city during World War II and witnessing the devastation, rebuild and rebirth of Coventry as the City of Peace.

And for George, who used to lecture at the university when it was known as Lanchester Polytechnic, the statue, which will feature three shapes to represent the Three Spires of Coventry, represents new beginnings.

The sculpture is about new life, new possibilities and new beginnings.

It takes inspiration from a story about a strange group of 60-foot criss-crossing trees I painted in Wales. I asked a farmer about the trees and was told a tree had fallen 90 years ago. It was buried, then new trees started to spring from the dead tree and grew much taller than the one that had fallen.

The story fits with what I believe in – in rebirth, that all things break up naturally in nature and out of that comes something new, growing sometimes stronger than before, like Coventry.

I can remember walking over rubble near this site, studying near here and watching the new cathedral go up. I saw something beautiful come out of destruction here and hope my statue can do the same.

I hope this is a fitting statue to symbolise the city and a growing university because for me the university is bringing life to the city.

Coventry University started the demolition process of the Alan Berry building in September and the sculpture and landscaped garden are expected to be unveiled in the summer of 2023.

The work will complement the redevelopment of the university’s new Faculty of Arts and Humanities facilities, which is currently underway, and the Starley Gardens urban space, which opened last year.

Together these three developments will create an open green space that will stretch from Coventry Cathedral to Cox Street.

The Alan Berry building has been a focal point for the university for six decades, and we wanted this site to continue to be a place where our students, staff and the wider community can come together to connect, reflect and build on our city's rich heritage of innovation and peace.

George’s work is a symbol of the city of Coventry’s continued growth and evolution, and we hope this space will become a place where our students, staff and the people of Coventry become inspired to pursue their dreams, like George was.

Find out more about Coventry University.