Ground-breaking trial for electric taxis with wireless charging gets underway 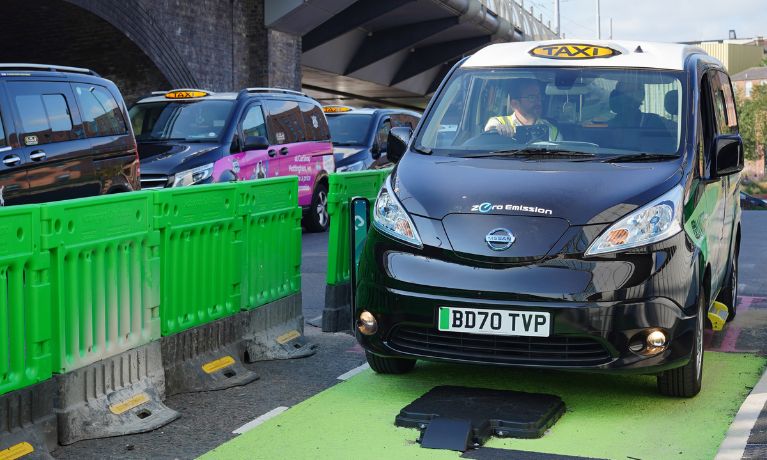 Researchers from Coventry University have played a pivotal role in the UK’s ‘first of its kind’ trial of wirelessly charged electric taxis by making the charging process effective and easy to use.

The electrification of vehicles in congested city areas is a crucial step in the reduction of transport emissions and improving air quality. For taxis however, cable charging with physical connections is usually impractical and inconvenient as drivers are constantly required to move their vehicles when they are waiting for passengers at taxi ranks.

The Wireless Charging for Electric Taxis (WiCET) trial gives taxi drivers the opportunity to wirelessly recharge their vehicles, in-rank, while waiting for their next passengers. The system allows simultaneous charging of multiple vehicles so that drivers can use the rank for short, top-up charging bursts while they queue for fares without needing to leave their vehicle.

The WiCET pilot is part of a government funded trial, that has wireless charging equipment fitted onto electric hackney carriages and installed into a taxi rank in Nottingham

Five wireless ground transmitter pad systems have been installed at the main taxi rank near the train station, and nine electric hackney carriages have been retrofitted with wireless receiver pads - five LEVC TX Taxis, and four Nissan Dynamo taxis. Wireless charging takes place when the driver aligns the taxi over the charging pads using a screen which acts as in-vehicle interface that tells drivers where the charging pads are. As the taxis move forward in the rank, the driver realigns the vehicle with the next pad and charging will recommence.

A potential barrier to the adoption of wireless taxi charging is that if the technology doesn’t work effectively and drivers miss out on fares, the acceptance and overall use of wireless charging will be limited.

Coventry University’s researchers at the National Transport Design Centre (NTDC), part of the Centre for Future Transport and Cities, were brought into the project to help overcome this issue. NTDC experts provided recommendations for what the interface should look like and how it should operate for the driver, ensuring that recharging is efficient and easy to operate.

Wireless charging is like any other technology solution in that the design needs to consider the user experience to increase acceptance and use of the new technology.

At Coventry University’s National Transport Design Centre, we engaged with Nottingham taxi drivers to understand what they need from our wireless charging system and the in-vehicle interface. The improvements made to the in-vehicle interface based on our research aim to streamline the charging process to make wireless charging more convenient and efficient.

The trial officially launched in September 2022 with a demonstration of the technology at the rank in Nottingham. This video shows how the technology works:

Find out more about the National Transport Design Centre.