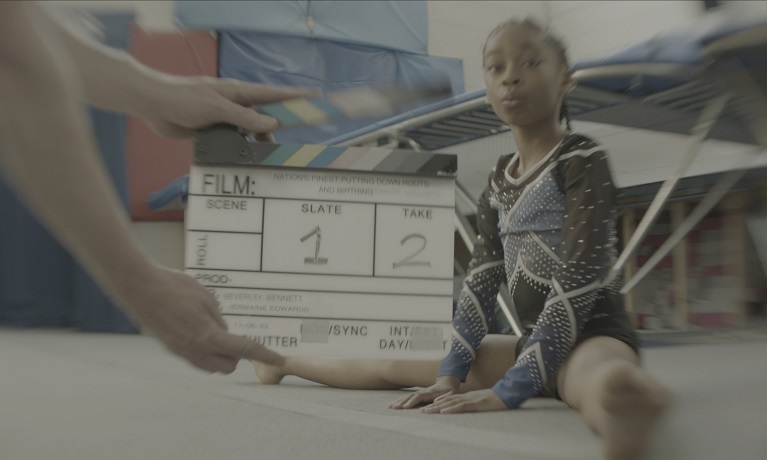 Coventry University is set to stage a unique debut screening of a powerful new video artwork crafted by the artist Beverley Bennett to mark the Commonwealth Games.

The film has been commissioned by Birmingham 2022 Festival and will be shown in a special screening at the university’s state-of-the-art media and production facility The Tank on 29 July.

Following the event, which will include an ‘in conversation’ talk with influential keynote speakers including Keith Piper; Beverley Bennett’s film will be projected onto the side of the iconic Elephant building in Cox Street – part of the former Coventry Sports and Leisure Centre – in what promises to be a moving spectacle.

It will be timed so that as the sun sets, the images become progressively more visible – mirroring the way Black athletes have become more visible over time. In this way, the artist invites audiences to reflect on the visibility of issues of race and national belonging in British sport.

The artwork – entitled Nation’s Finest, Putting Down Roots and Birthing – also pays homage to the pioneering Blk Art Group, a highly influential collective of multidisciplinary conceptual artists from the West Midlands who came together from 1979 to 1984. Founding members Keith Piper and Eddie Chambers first met in Coventry while studying art at what was then Lanchester Polytechnic, now the School of Art and Design at Coventry University. Fellow founding members of the group, Claudette Johnson and Marlene Smith, will also be in attendance at the event on 29 July.

We’re delighted to have worked with Beverley and her team at the Blk Art Group Research Project on this remarkable commission, to reflect not only on the heritage of Black art and Coventry but on the role of artists and athletes in inspiring the next generation.

The West Midlands was a significant base for Black artists during the early 1980s. The art school here was the meeting place for two of the key figures behind the Blk Art Group, and their impact on contemporary art continues to be significant today.

Bennett’s film shines a light on her great niece and nephew, both are from gymnastics teams based in Sandwell near Birmingham. The accompanying commentary features the voices of people from Coventry and Wolverhampton who offer their honest and insightful views on the Commonwealth and share experiences of race relations in the UK.

The project builds on Coventry University’s efforts to encourage important collaborations and conversations in the community.

It’s been an honour to work with the Blk Art Group Research Project alongside commissioning curators Ian Sergeant and Marlene Smith, the project team, Coventry University and University of Wolverhampton in my home region of the Midlands.

Their support and guidance has been extraordinary. I was welcomed by the community group ‘ACCI Wolverhampton’ and ‘Taskforce is Root Connecting Communities Coventry’. I cannot thank them enough for their openness to my proposal to work together for a number of weeks during our gatherings sharing their thoughts, stories, honesty and insight to the ides rooted in the project. And a huge thank you to the film crew and the gymnasts who have taken being the centre of attention in their stride.

Attendees are invited to gather in Coventry University’s Starley Gardens where audio from the short film will be played and a view of Beverley Bennett’s production will be visible on the Elephant building.

Nation’s Finest, Putting Down Roots and Birthing is presented by the Birmingham 2022 Festival, generously funded by Arts Council England and the National Lottery Heritage Fund.

We are delighted to be working with Beverley Bennett and the BLK Art Group Research Project to present Nation’s Finest, Putting Down Roots and Birthing across Wolverhampton, Coventry and Birmingham for the Birmingham 2022 Festival.

This work was commissioned in response to a brief to mark the influence and impact of the BLK Art Group, a highly influential group of conceptual and installation artists, painters and sculptors from the West Midlands who came together in the early 1980s, paving the way for British black art as we now know it.

Find out how to book to attend the event in The Tank at Coventry University.

Find out more about Coventry University’s Faculty of Arts and Humanities.