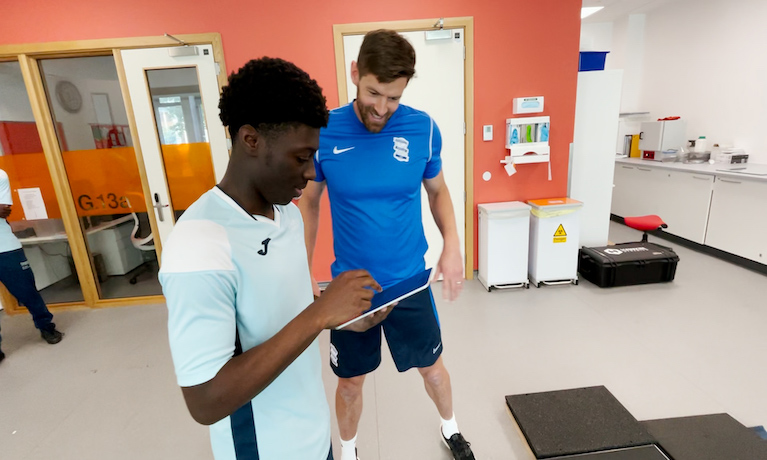 Students at Coventry University teamed up with Birmingham City FC’s first team squad to put them through pre-season tests ahead of the new EFL Championship campaign.

The majority of the Blues squad reported to campus on Monday 20 June to kickstart their preparations for the new season, as students collected blood samples, tested players’ strength, put them through their paces and reported back to the playing and coaching staff with insights and results.

It wasn’t the first time the club has teamed up with Coventry University to utilise the wide range of cutting edge facilities within the university’s Faculty of Health and Life Sciences as part of their pre-season regime, and the players spoke glowingly of their experiences and the dedication and passion of the students.

Former Premier League striker and current Birmingham City FC captain Troy Deeney was especially impressed with the culture and relationship between the players and coaches at the club and Coventry University’s staff and students.

Obviously the facilities here are great, but anywhere can boast state-of-the-art facilities – it’s really all about the people and I feel like Coventry University has got the culture and the environment spot on here. I feel as though there’s a real fine mix between learning, enjoyment and a pathway to being professional and obtaining a job at the end of it.

I think when you come into an environment like this, it’s perfect. It’s good for the students and the players alike and everyone is striving for excellence and perfection so I think it’s mutually beneficial.

Fellow striker and club vice-captain Lukas Jutkiewicz also spoke highly of his experience on campus along with midfielder Gary Gardner, both of whom have worked with Coventry University staff and students in the past.

Dr Jason Tallis and Dr Rhys Morris were driving forces in making this opportunity a reality in collaboration with Birmingham City FC, and Assistant Professor Dr Emma Eyre played a crucial role in delivering and overseeing the testing alongside students on the day.

A lot of preparation goes into days and opportunities like these, and I’m delighted to see the hard work of everyone on our side and at Birmingham City paying off. The day ran like clockwork and to give our students the chance to put what they’ve learned with us into practice with an elite professional football team will undoubtedly be invaluable to their skillsets, their experience and hopefully their career prospects when they graduate.

Experiences like these for anyone aspiring to work in elite professional sport are vital. To be able to hone our skills, work effectively and efficiently under pressure alongside established professionals and trust ourselves to deliver is a really empowering and important opportunity.

Find out more about studying sport and exercise science at Coventry University.