Coventry University arranged the science, maths and music workshops at Hearsall School, Coventry, to mark the life of Coventry-born Delia, who created the eerie Doctor Who theme music while at the BBC Radiophonic Workshop in the 60s. 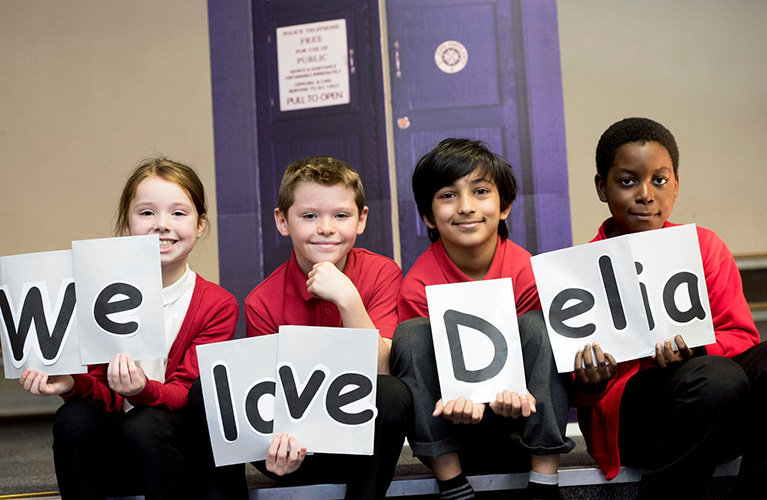 Delia was awarded a posthumous honorary doctorate by the university in a ceremony at Coventry Cathedral last year. Children from years four and six at the Kingston Road school took part in the workshops, led by Coventry University staff, actors from Noctium Theatre and local sound engineer and musician Tim Seeley. The sessions were designed to raise awareness of Delia achievements and to help them think about maths and science in a different way – just like Delia.

Delia famously said the noises of air raid sirens and bombs dropping which she heard as a child in the Coventry Blitz inspired her electronic music creations.

Delia, a former Barr’s Hill Grammar School pupil, studied maths at Cambridge university. But when she applied for a job as a studio manager at Decca Records she was rebuffed as they ‘did not employ women’.

Although she found a post at the Radiophonic Workshop, she was not credited for her work on the Doctor Who theme. As part of the workshops, children watched Delia step out of a Tardis into war-torn Coventry, before learning about her life as a adult and trying her innovative music-making techniques. Coventry University staff, led by journalism course leader Bianca Wright, also used Virtual Reality helmets to transport children back into 1940s Coventry, so they could experience the world which inspired Delia for themselves.

Here's what some of those attending said...

I think it was very selfish she did not get to work at the record company because she was a woman. It was great she got to write music eventually or we wouldn’t have the Doctor Who theme.

My amazing friends and family and for the time I got with those no longer here.

I found out lots about Delia I didn’t know. It was really interesting.

Delia was incredibly important and it is great now that we and Coventry university are helping her get the credit that is long overdue. She really fought against the odds to succeed and her story and techniques have really engaged the children.

It was a privilege to play such and interesting woman and the children clearly found her life so interesting. I think Delia would be pleased to think she was inspiring future mathematicians and musicians.