I am a Senior Lecturer in Operations and Supply Chain Management at Coventry University and Associate Fellow at Saἲd Business School, University of Oxford. I have research interests intersecting project management, leadership and the Islamic economy.

I am an award-winning author, receiving the Outstanding Paper Award at the Literati Network Awards for Excellence in 2013 for my journal article on leadership and organisational commitment within project managed environments. I have published over thirty peer-reviewed journal articles and I am on the Editorial Advisory Board for the International Journal of Islamic and Middle Eastern Finance and Management, published by Emerald and associate editor and reviewer for a number of journals, including the International Journal of Project Management.

I graduated in 1999 with a PhD in Operations Management and have research and teaching experience at the universities of Oxford, Manchester, Hull and Lincoln in the UK and UAE University, The British University in Dubai and The American University in Dubai in the United Arab Emirates. I was formerly a Research Fellow in Major Programme Management at Saïd Business School, University of Oxford and a member of Kellogg College, Oxford. I have also worked for an international non-governmental organisation as Senior Policy Advisor and Head of Research & Development.

My published works on developing nations and the reputational effect of managing large-scale events, particularly on Olympic games’ host cities, has influenced views on urban regeneration, legacy and the importance of sustainable environments, receiving global mainstream coverage, principally during the London 2012 Olympic Games.

Furthermore, I hold a Master’s degree in Islamic Studies from the University of Wales and have developed specialist research on the Islamic economy at Oxford, focussed on areas including global Halal markets and corporate Waqf (endowments); work that informs the policy and practice of government ministries and public-private partnerships, particularly in trade, development and social responsibility in the Middle East and SE Asia regions. 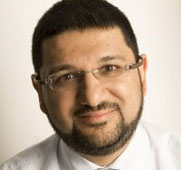