Lecturer in English and German

After graduating with a BA degree in French and German, I spent a year in Greece teaching English and then returned to the UK to train as a language teacher. In 1993 I was appointed Lecturer in German at the University of Wolverhampton where I remained for 9 years, teaching German language, German studies, general linguistics and translation studies. I completed a PhD in Germanic linguistics at the University of Reading in 2007 and have since worked at Coventry University mainly teaching academic English with a leaning towards the needs of postgraduates. I have also given language teacher training and presently manage the University’s German language provision.

My main research interest is in grammatical theory and description, with a growing interest in ‘non-derivational’ or ‘constraint-based’ approaches such as Construction Grammar, though I remain convinced that an adequate theory of grammar is not ‘usage-based’ but one that takes grammar to be a form of acquired mental knowledge which remains throughout life relatively unaffected by the pressures of usage. I am presently working on an article investigating the relationship between ‘idiomatic’ and ‘non-idiomatic’ forms of ditransitive verbs in English. 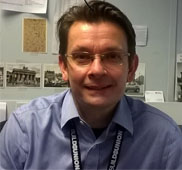