Director of Arts, Culture and Heritage

Responsible for the development of the university’s cultural assets, external cultural profile, student cultural engagement and external partnership liaison with regional and national cultural and artistic bodies and organisations, City of Culture programme and delivery of the city’s Ten-Year Cultural Strategy. 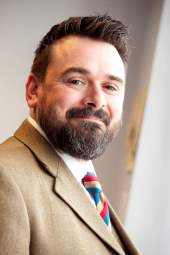 Dr Geoff Willcocks is Director of Arts, Culture and Heritage at Coventry University. He joined Coventry University in 2002 and was previous Head of Department for Performing Arts. He was recently seconded to the Executive Committee of Coventry City of Culture Trust as part of the successful 2021 bid team. During this time, he co-authored the city’s Ten-Year Cultural Strategy and is responsible for the biennial Cultural Audit of the city. He has played a central role in the development of the city’s heritage sector, particularly with regards to his work as the Vice Chair of Historic Coventry Trust, an organisation that is now recognised as the new model for heritage development agencies in the UK. He has advised Art Council England on the role of Higher Education in UK Culture and as Chair of the Midlands Higher Education Forum his role is to develop and enhance mutually beneficially relationships between the universities of the Midlands its cultural sector. He instigated the creation of Coventry Dance, the Cathedral Quarter Alliance and is an executive member of Coventry Creative and Cultural Alliance, which is leading on the future cultural development of the city.