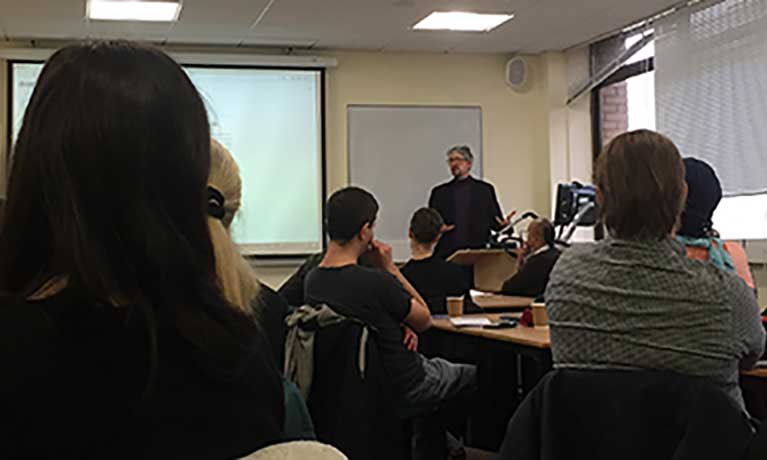 On 30th January, the Centre for Trust, Peace and Social Relations and Coventry Refugee and Migrant Centre held the latest of their Breakfast Briefings to discuss the global dynamics and local challenges of refugee resettlement.

Around 22.5 million people around the world have been displaced across international borders by armed conflict, persecution or human rights violations. UNHCR estimates that two thirds of this population have been living in long-term, protracted displacement. For these refugees, and others with certain vulnerabilities, resettlement is the only opportunity for permanent settlement in a country that can meet their protection needs.

The event asked what it is like to be a refugee undergoing resettlement, who is resettled, how, when and why and what challenges and opportunities are posed by refugee resettlement for Coventry.

Reflecting on his own experience, Abdulmunem Radwan said that he relied on resettlement for the wellbeing of him and his family. He had been a lawyer in Syria but had to flee to Jordan during the war. Once there, he wasn’t allowed to work to provide for his family. It was hard even for local communities to gets jobs there, let alone refugees, he said. Resettlement provided a new future for them.

In the UK, gradual increases in the number of people resettled annually have made the UK the fifth largest settler of refugees in the world. However, the total figures remain very small, rising from a few hundred a decade ago in the 2000s to around 5,000 per year since 2016. This is a tiny proportion of the total number of people in need of resettlement. At the same time, a dramatic reduction in places offered by the Trump administration in the USA, the world’s largest resettler of refugees, is likely to have a significant impact on the lives of refugees around the world waiting for the chance to move.

Resettlement was also described by Michael as ‘about the most dramatic form of migration anywhere, they might spend 20 or 25 years in a refugee camp and just a few days later they’re on a plane somewhere for resettlement’. Refugees who have been referred to resettlement have to meet often stringent entry requirements, go through long periods waiting in countries of asylum, and face sometimes challenging conditions upon reception in countries of resettlement. Adapting to this rapid change can represent a major personal challenge.

Many of the people being resettled have little knowledge of the place they are moving to. Amanda Salomonsson spoke about some of the complexities of this process of resettlement. Refugees ask can we get an education? Will we be welcome?  Will I have to give up my belongings? Will I be able to walk around freely in the streets? To address these concerns, information before resettlement and connecting with community networks in the place of arrival are vital.

The diverse and multicultural character of Coventry’s population has been highlighted as a key factor mitigating some of the challenges of refugee resettlement. Welcoming refugees is part of the city’s identity, as highlighted by Peter Barnett from the City Council when he stated ‘Coventry people live with a clear consciousness of the impact of war, and Coventry’s response to the needs of refugees emanates through that’.

Abdul’s experiences epitomise the journey that many have been through. ‘I had no idea about Coventry before’ he said, ‘now I think it’s the best place for us, wherever you go you find smiles, we feel safe, we feel respected, we feel at home.’