Ankara bombs: Turkey is being torn apart by bad leaders and bad neighbours 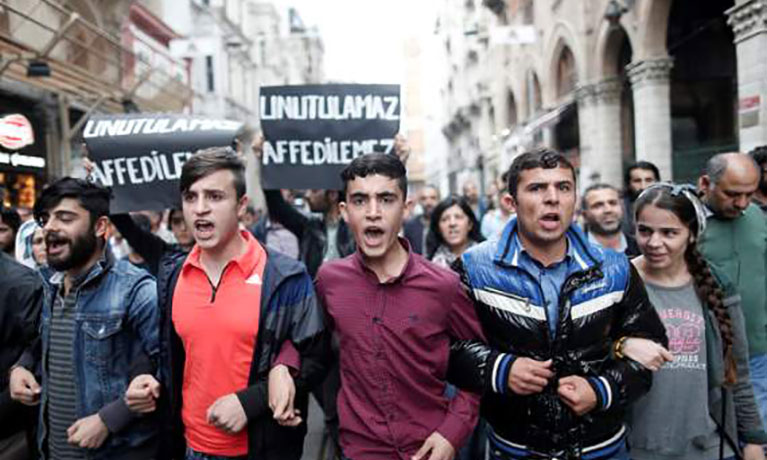 It had already been a deadly summer of political instability in Turkey. And now this. Another bloody massacre – this time at the hand of twin bomb attacks on a peace rally in Ankara, which have killed at least 97 people.

It is the worst terror attack in Turkey’s history, and the culmination of a dreadful wave of violence. In just a few months, hundreds of civilians, Turkish security personnel and PKK members have been killed. Barely a single day passes in Turkey nowadays without some incident of lethal political violence.

Freedom from fear is the very basic principle of human security, which should be protected by any state that wants a true sense of legitimacy over its population and territory. In Turkey, that freedom is under enormous pressure from all sorts of internal and external forces.

There are plenty of competing explanations for the political violence engulfing the country, but none can seriously overlook the impact of Turkey’s dreadfully bad political leadership.

The terrible, violent summer reflects nothing so much as an elite’s greed for power and willingness to treat civilians as dispensable. This has become particularly apparent since Turkey’s inconclusive June 7 election, and the way that various political parties and leaders did all they could to prevent the formation of a viable coalition government.

Ultimately, the power game is simple enough. At the elections hastily called for November, President Recep Tayyip Erdogan’s AKP needs to garner only a few per cent more than it did in June to win the majority it needs for Erdogan to bolster his powers and make himself the country’s executive president.

To that end, pro-government media has been in overdrive throughout the summer, deliberately fuelling an environment of division, paranoia and mistrust in hopes of winning votes out of pure fear.

All the while, south east Turkey has endured dreadful vioence. Some towns – Cizre, for instance, which was under seige for days – have suddenly found themselves on the front line of renewed fighting between the security forces and the PKK.

The demise of the peace process is not just a failure of diplomacy – it signals that the armed conflict is still hugely politically and financially lucrative to Turkey’s political and military leaders. And the violence they’re profiting from is rapidly corroding social life and human security across the country.

THE WAR NEXT DOOR

But the political instability caused by Turkey’s bad leaders has been greatly exacerbated by its bad neighbours, especially the continuing civil war in Syria and its deadly ramifications – an influx of jihadist fighters, a massive refugee crisis, and spiralling military interventions.

Since the end of the Cold War, global security has never been so seriously threatened as it is by today’s situation in Syria, which is now host to a head-to-head clash between the interests of Russia, the Assad regime and Iran on the one hand and the US, the EU, their Arab allies, and NATO on the other.

All sides claim to be fighting against the Islamic State and other Islamist extremists, but it’s clear that what’s really at stake is a lot more than just the fate of the jihadists or the political future of Syria. Already there’s an ominous spat underway over Russian planes' incursion into Turkish airspace; NATO has already raised the prospect of sending troops to Turkey as a defensive gesture.

And while it was always inevitable that the Syrian disaster would affect its northern neighbour to some degree, Turkey’s continuing internal political instability is proving something of an Achilles heel. By deliberately forcing their country into a period of chaotic and violent turmoil, Turkey’s leaders have made it more susceptible than ever to the Syrian conflict and the mighty geopolitical currents swirling around it.

And yet they press on with their cynical political ploys – seemingly unmoved by the cost to their people, and unaware that they could just be becoming pawns in a much bigger game.