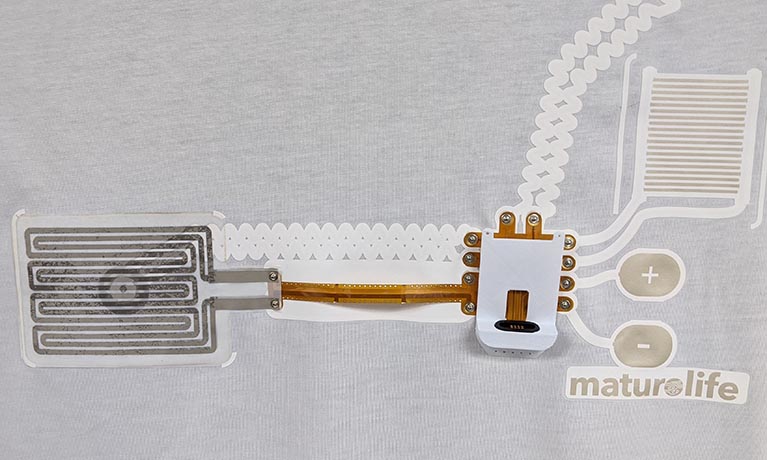 A major research project led by Coventry University has seen the development of new technology that could help people to live more independent and comfortable lives for longer.

Assistive technology — such as tracking devices which can be worn around the arm or neck to provide security and peace of mind — have been designed to support older people and those with disabilities to carry out activities that might not be possible otherwise. But current technology, although functional, can be stigmatising, leading to some people choosing not to use it.

MATUROLIFE, a €6million project funded by the European Commission’s Horizon 2020 programme, has successfully developed and tested prototype technology embedded within footwear, clothing and furniture that is designed to be effective and discreet.

The first prototype uses sensors in the insole of a shoe to monitor a person’s walking pattern and balance. These sensors have been designed to monitor major deviations set against regular walking patterns to detect the risk of falling, and send alerts of irregular movements to carers or family members through a connected app.

The second product uses sensors in a seat or sofa to recognise the person just by the way they are sitting, monitors indicators of their health and can help them to stand up by tilting.
The sensors can also be set to wake a person up after a certain amount of time if they are having an afternoon sleep, for example, and the product has a panic button and an app to warn a carer if somebody has been still for a long time.

The third is a shirt which can monitor and maintain an even body temperature provided by an integrated heater in the fabric.

The products use e-textiles, which are produced via a novel ‘print and plate’ process which deposits a thin layer of copper on the fibres within the fabric with the capability to introduce electronic connectivity or create sensors.

The idea was that these prototypes would be not only functional, but they would also be something you would want to wear or use.

The older adults we worked with were really enthusiastic and really engaged with us.

With an ageing population, it is vital that new approaches are developed to support healthy and independent living for longer.

The project team and researchers are working with manufacturers to take the products forward to market, while continuing to develop more prototypes.

This project has received funding from the European Union’s Horizon 2020 research and innovation programme under grant agreement No 760789.