Migration and inequality: time for a new story 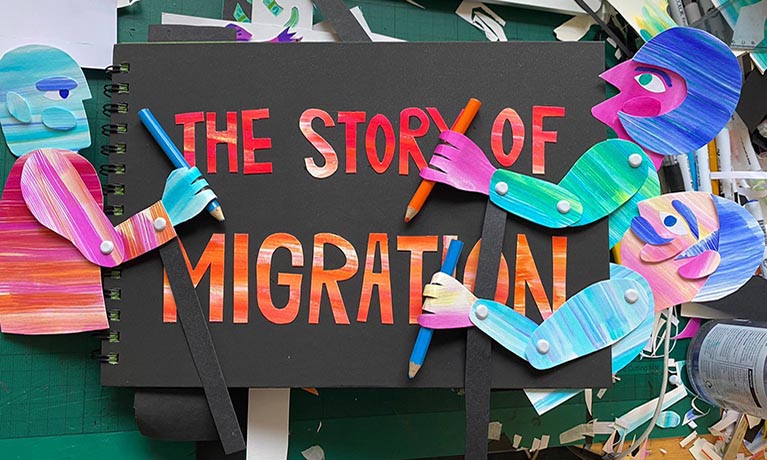 A Coventry University-led migration project is aiming to tell the complicated story of the relationship between migration and global inequalities through an animated video, recreated in six languages.

The animation looks to demonstrate the importance of international research projects, which are able to generate new knowledge on migration issues, challenge political and media narratives, and ultimately contribute to improving the lives of those living in the Global South. Most importantly it puts inequalities at the heart of the story.

The Story of Migration video has been produced by the South-South Migration, Inequality and Development Hub (MIDEQ) and PositiveNegatives, a research based, creative organisation which produces literary comics, animations and podcasts about contemporary social and humanitarian issues.

For too long the story of migration has been dominated by the views and interests of the Global North. This story has focused on issues of security and border controls, ignoring the complex factors that drive people to move in different parts of the world. Migration is a part of our history and will inevitably be part of our future. If we want migration to work for everyone then we need to better understand and address the structural inequalities – poverty, gender inequalities, and racism – that drive migration and limit its potential to contribute to development.

Based on a script written with MIDEQ’s partners in 11 countries in the Global South (including Brazil, Ethiopia, Malaysia and South Africa), the animation illustrated by Karrie Fransman challenges many of the ideas that currently dominate media representations of migration, highlighting:

The video engages a wide range of audiences that feature in MIDEQ’s work and highlights the importance of understanding global migration from the perspectives of those living and working in the Global South.

The Story of Migration has been the most collaborative animation we’ve made at PositiveNegatives, co-produced with 17 partners across 11 countries and during the most challenging times when the COVID-19 pandemic has meant we needed to rely on new technologies to successfully collaborate. We wanted to make a film that engages a varied global audience from young students to senior policy makers in the complexities of migration and inequality. We think the film does exactly that.

The film can be viewed in English, Portuguese, Tamil, Malay, French and Mandarin, and will be released in additional languages over the coming months.