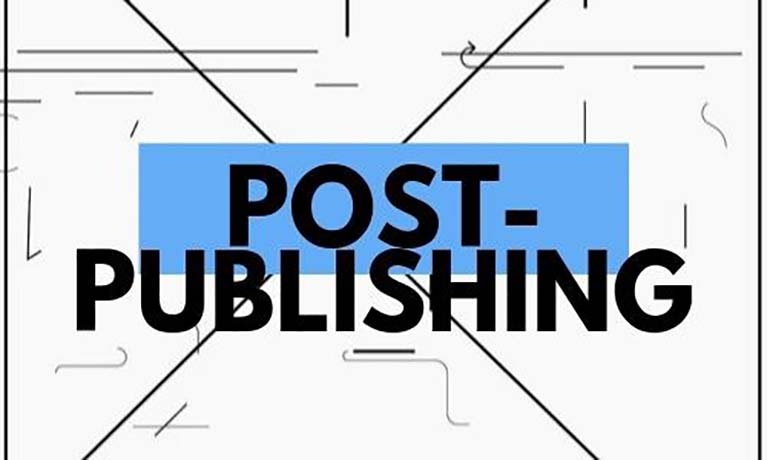 This is the third in a series of symposia hosted by the Centre for Postdigital Cultures (CPC) exploring contemporary approaches to experimental publishing.

Over the course of the series, we will ask questions about the role and nature of experimentation in publishing, about ways in which experimental publishing has been formulated and performed in the past, and ways in which it shapes our publishing imaginaries at present. This series aims to conceptualise and map what experimental publishing is or can be and to explore what lies behind our aims and motivations to experiment through publishing. As such, it forms the first activity within the CPC’s new Post-Publishing programme, an initiative committed to exploring iterative and processual forms of publishing and their role in reconceptualising publishing as an integral part of the research and writing process, i.e. as that which inherently shapes it.

Cristina Garriga is a designer based in Amsterdam. Since 2014 she works as My Bookcase, a creative studio exploring the role of the book and its reader in today’s society through digital projects, workshops, events, commissions and exhibitions. In 2018, My Bookcase launched the online directory of independent publishers ‘Readers & Publishers’ – a response to the need among artists and writers to know how publishers work and how to reach each other. Garriga is also a founding member of Publication Studio Glasgow and has led many courses and workshops in a wide variety of art organisations and institutions. She holds a Mlitt in Fine Art from The Glasgow School of Art, a BA and Masters in Architecture from ETSAB Barcelona and an Expert Class in Type Design by the Plantin Instituut voor Typografie in Antwerp.

Aymeric Mansoux has been messing around with computers and networks for far too long. Recent projects include What Remains, an 8-bit video game about the manipulation of public opinion and whistleblowing for the 1985 Nintendo Entertainment System, and LURK, a server infrastructure for discussions around cultural freedom, experimental, new media art, net and computational culture. Aymeric received his doctorate from the Centre for Cultural Studies, Goldsmiths, University of London (2017), for his investigation of the decay of cultural diversity and the techno-legal forms of social organisation within free and open source based cultural practices. He currently runs the Experimental Publishing (XPUB) master course at the Piet Zwart Institute, Willem de Kooning Academy, Rotterdam.

Experimental publishing can be positioned as an intervention, a mode of critique, and a tool of speculation. It is a way of thinking about writing and publishing today that has at its centre a commitment to questioning and breaking down distinctions between practice and theory, criticality and creativity, and between the scholarly and the artistic.

In this series of events we propose to explore contemporary approaches to experimental publishing as:

This take on experimentation can be understood as a heterogeneous, unpredictable, and uncontained process, one that leaves the critical potentiality of the book as a medium open to new intellectual, political, and economic contingencies.