Delivered the Same Day: The Post Office and Amazon.com 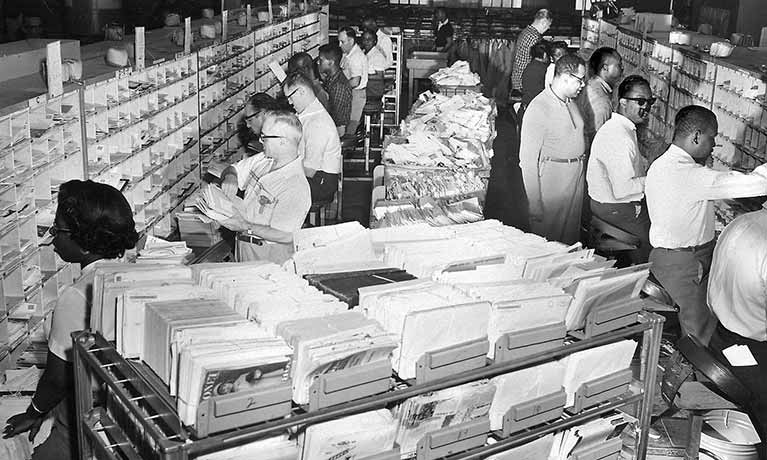 Historically the postal service has solidified as a national and transnational infrastructure owned by the public, for the benefit of the public. It has played a central role in organising long-distance communication - mail, telegraph, telephony - facilitating, amongst other things, the regular delivery of written correspondence, the dissemination of printed matter, the expansion of the public sphere, but also the surveillance of communication and the coordination of war.

Alongside being political, the postal service was also an intensely technological institution. It has laid down the postal paths, network topologies, and routing protocols for later communications networks to follow. In fact, in the UK, the Post Office has had its own Research Station since 1909, helping develop the first transatlantic radiotelephone service and the world's first programmable electronic digital computer – Colossus.

No less important is the fact that the postal service also created a material distribution system. In the very period when the communicational infrastructures became deregulated, privatised and disinvested, on the back of these services and their delivery networks arose the digital platforms - most prominently the informational-distributive Behemoth that is the Amazon.com.

This event will explore the contrast between the transformative role the postal service as a public institution has had - and continues to have in spite of its creeping privatisation and erosion - and the disruptive role Amazon.com is now playing by offering cloud computing infrastructure, furthering platformisation, automating digital network services, and casualising the labour inside and outside of of its own operations.

II. Amazon.com: work, property and metrics in the logistical circuit

Janneke Adema is a Research Fellow at the Centre for Postdigital Cultures at Coventry University. In her research, she explores the future of scholarly communications and experimental forms of knowledge production, where her work incorporates processual and performative publishing, radical open access, scholarly poethics, media studies, book history, cultural studies, and critical theory. She explores these issues in depth in her various publications, but also by supporting a variety of scholar-led, not-for-profit publishing projects, including the Radical Open Access Collective, Open Humanities Press, and Post Office Press (POP). You can follow her research, as it develops, on openreflections.wordpress.com.

Peter Conlin is a media lecturer and research associate at the Centre for Postdigital Cultures at Coventry University. He is currently developing a book project entitled Evitable: The De-obsolescent Future of Media and Urban Space (Routledge Press).

Valeria Graziano is a Research Fellow at the Centre for Postdigital Cultures, Coventry University. She is co-editor with Kim Trogal of ‘Repair Matters’, a special issue of the ephemera: Theory & Politics in Organisation (2019) and convenor of the international project Pirate Care.

Gary Hall is a writer, philosopher and cultural theorist working (and making) in the areas of digital media, politics and technology. He is Professor of Media in the Faculty of Arts & Humanities at Coventry University, UK, where he co-directs the Centre for Postdigital Cultures. He is the author of a number of books, including The Inhumanist Manifesto (Techne Lab, 2017), Pirate Philosophy (MIT Press, 2016), The Uberfication of the University (Minnesota UP, 2016), Digitize This Book! (Minnesota UP, 2008), and Culture in Bits (Continuum, 2002).

Kaja Marczewska is a Research Fellow at the Centre for Postdigital Cultures, Coventry University, UK. Her research is positioned at the intersection of publishing and book cultures, cultural studies, and experimental arts and writing. She is the author of This is not a copy(Bloomsbury Academic 2018), Book-mobility: cultures of small press distribiution (CUP 2020), and a co-editor of The Contemporary Small Press: Making Publishing Visible (Palgrave 2020). In 2018, she was a Reese Fellow for American Bibliography and the History of the Book in the Americas, Terra Foundation fellow, and The Getty Research Institute visiting fellow, and will be taking up visiting fellowships at Sallie Bingham Centre, Duke University and at Michigan State University later this year.

Marcell Mars is a research associate at the Centre for Postdigital Cultures at Coventry University (UK). Mars is one of the founders of Multimedia Institute/MAMA in Zagreb. His research “Ruling Class Studies”, started at the Jan van Eyck Academy (2011), examines state-of-the-art digital innovation, adaptation, and intelligence created by corporations such as Google, Amazon, Facebook, and eBay. He is a doctoral student at Digital Cultures Research Lab at Leuphana University, writing a thesis on “Foreshadowed Libraries”. Together with Tomislav Medak he founded Memory of the World/Public Library, for which he develops and maintains software infrastructure.

Tomislav Medak is a doctoral student at the Centre for Postdigital Cultures at Coventry University. Medak is a member of the theory and publishing team of the Multimedia Institute/MAMA in Zagreb, as well as an amateur librarian for the Memory of the World/Public Library project. His research focuses on technologies, capitalist development, and postcapitalist transition, particularly on economies of intellectual property and unevenness of technoscience. Together with Marcell Mars he coedited Public Library and Guerrilla Open Access.

!Mediengruppe Bitnik are the artists Carmen Weisskopf and Domagoj Smoljo. They are contemporary artists working on and with the Internet. Their practice expands from the digital to affect physical spaces, often intentionally applying loss of control to challenge established structures and mechanisms. In early 2013 !Mediengruppe Bitnik sent a parcel to WikiLeaks founder Julian Assange at the Ecuadorian embassy. The parcel contained a camera which broadcast its journey through the postal system live on the internet. They describe «Delivery for Mr. Assange» as a SYSTEM_TEST and a Live Mail Art Piece. They have also been known for sending a bot called «Random Darknet Shopper» on a three-month shopping spree in the Darknets where it randomly bought objects like Ecstasy and had them sent directly to the gallery space.

Dr Jamie Woodcock is a researcher at the Oxford Internet Institute, University of Oxford. He is the author of Marx at the Arcade (2019, Haymarket) about videogames, and Working The Phones (2017, Pluto), a study of a call centre in the UK - both inspired by the workers' inquiry. His research focuses on labour, work, the gig economy, platforms, resistance, organising, and videogames. He is on the editorial board of Notes from Below and Historical Materialism.

Seminar series and the research group:

Work, property, metrics is a series of seminars, workshops, and talks investigating the transformations of work, property relations, and mechanisms of social control resulting from the processes of digitisation, computerisation, and automation. These transformations are reflected in a crisis of institutions responsible for the universal access to social goods and services: employment, care, education, housing etc. With our research activities we want to investigate, support, and develop practices emerging in response to this crisis - ranging from alternative organisational models, collective forms of work, all the way to refusal. In its first round of events, this series is focusing on the institutions responsible for the provision of communication, information, and education - the postal service, the library, and the university.

Post Office is an exercise in imagining counter-institutions in response to the crisis of those very institutions. It is an endeavour in devising practices that collectively re-configure public infrastructures against the onslaught of managerial neoliberalism and technological acceleration. As a research collective (connected to the Centre for Postdigital Cultures at Coventry University), it is a horizontal experiment in knowledge production and action situated between theory and technology, politics and poetics, the inside and the outside of the university. Post Office follows a methodology of affirmative critique. Our projects are both critical and performative: actively changing the situations in which they intervene while helping devise protagonist-centered approaches to organisation, methodology, and technology. We are involved in changing scholarly and creative writing, publishing, libraries, open access, universities, cultural production, the humanities, technologies, and labour relations, and want to create alternatives for a more just, diverse, and equitable future.

Turn up on the day.