The university’s ‘Edible Campus’ is one of just nine inspirational parks and green areas in the UK  - and the only university space -  to achieve the award, which is presented to Green Flag Award or Community Award winning sites that show that they have made changes which have brought outstanding benefits to both their site and the local community.

The Edible Campus was created to 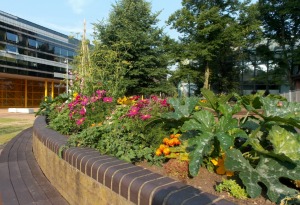 make use of an underused part of the university grounds, which now boasts nectar rich plants as well as recognisable and less common vegetables, fruits, herbs and flowers.

We’re delighted to see our ‘Edible Campus’ being recognised nationally by the Green Flag Award Scheme.

While we work hard to ensure that we have the best learning facilities at our university we also believe it’s important to create a pleasant environment for all those who come here. That was the thinking was behind the creation of our Edible Campus and we’re really pleased to see that it’s proved popular with students, staff and visitors alike.

Congratulations to everyone involved in the Edible Campus, a worthy winner of the Special Innovation Award.

Research has proved that quality parks and green spaces play a vital role within their local communities. Coventry University’s Edible Campus is a perfect example of how our green spaces can positively contribute to the local environment and bring the community together.

Keep Britain Tidy is a leading environmental charity, which inspires people to be litter-free, to waste less and to live more. The charity runs programmes including Eco-Schools, the Green Flag Award for parks and green spaces and the Blue Flag/ Seaside Awards for beaches.

Keep Britain Tidy runs the Green Flag Award scheme in the UK on behalf of the Department for Communities and Local Government. It is run in partnership with Keep Wales Tidy, Keep Northern Ireland Beautiful, Keep Scotland Beautiful, the National Housing Federation and the Federation of City Farms and Community Gardens.

Any green space that is accessible to the public is eligible to enter for a Green Flag Award.  Awards are given on an annual basis and winners must apply each year to renew their Green Flag status. A Green Flag Community Award recognises quality sites managed by voluntary and community groups. Green Heritage Site accreditation is judged on the treatment of the site’s historic features and the standard of conservation.

To find out more about Keep Britain Tidy, its programmes and campaigns visit www.keepbritaintidy.org.