Texting and driving: A conscious choice that can never be justified 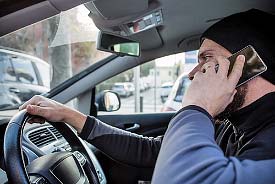 The UK has been researching the effects on drivers of using a mobile phone for longer than any nation. Even before mobiles as we now know them existed, experiments from the sixties showed that driving performance got worse when the driver talked over a radio link. Nowadays, people even struggle to remember the detail of a TV show if they're on a call or checking social media at the same time – if they're driving, this lack of awareness can be fatal.

Many drivers think talking on a smartphone is no more distracting than talking to a passenger, and many believe they are capable of multi-tasking. The accident statistics show otherwise, with some estimates indicating that as many as 28% of all accidents and fatalities are caused by drivers using phones. In the short term, the situation is likely to get worse. Texting and driving is increasingly commonplace, as is the regular checking of social media. Although such actions are punishable offences, drivers feel the benefits of maintaining contact through their smartphones outweigh the risks of being caught. Simply put, they're thinking about their chances of getting away with it rather than the potential catastrophic consequences of their actions.

A driver who texts and drives is around 13 times more likely to be involved in a collision, and their reaction times in emergency events are often longer than drivers intoxicated by alcohol. It's critical to raise awareness of these issues to the point where – like drinking and driving – texting behind the wheel is seen as socially unacceptable.

Proposed technological solutions are currently making headlines, for example 'drive safe' modes in cars which would allow smartphone activity to be blocked at the wheel. Technically this is perfectly possible, but questions remain over how it would be implemented. Should it be voluntary or mandatory? Should it block whenever the vehicle is moving, or just above certain speeds? And what would happen if the driver needed to make an emergency call? All the while these proposals are being discussed, people are dying needlessly on our roads.

Ultimately, using a smartphone when driving – whether for social or work purposes – can never be justified. It is a conscious choice by the driver to put themselves, their passengers and other road users at severe risk. Roads are hazardous places, but those using phones behind the wheel are making them much more dangerous for all of us.