The executive vice president of Nissan, Dr Andy Palmer, is set to return to the city where his career began to deliver one of Coventry University's flagship free public talks – the Bugatti Lecture – on Tuesday 28th January.

Dr Palmer, who holds a diploma in industrial design from Coventry University, has just been named in the Queen's New Year Honours list in recognition of his services to the British automotive industry. He will talk about 'The Future of Motoring', and where he sees the sector 10 years from now. 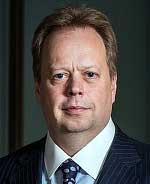 Following Dr Palmer's talk on the Tuesday, motoring expert Tom Donnelly – professor of automotive business at the University – will deliver a lecture on Wednesday 29th January entitled 'Skills – a Brake on British Industry', which will explore the issue of skills shortages in engineering and maths in the UK, and how the situation can be remedied.

As a global Nissan executive, Dr Palmer – who was born in Stratford-upon-Avon and began his automotive career as an apprentice in Coventry – has played a major part in bringing a number of significant projects to the UK through his extensive knowledge of the country's manufacturing capabilities.

Dr Palmer has also been influential in establishing a number of partnerships such as Infiniti Red Bull Racing in Formula One and the high-performance program with Williams Advanced Engineering. He also oversees Nissan's zero emissions vehicle planning and strategy.

Inspiring the next generation of talent to help Nissan to create 'innovation and excitement for everyone' is one of my biggest passions, and I look forward to participating in the lecture.

As worldwide demand for automobiles grows, our continued leadership in vehicle electrification and the push for autonomous driving by 2020 offers rewarding opportunities for the best and the brightest to help us achieve our future automotive vision of zero emissions and zero fatalities.

Dr Palmer's talk will take place at 6pm on Tuesday 28th January in the Goldstein Lecture Theatre (Alan Berry Building, opposite the cathedral steps), and places should be reserved at www.coventry.ac.uk/bugatti2014. Professor Donnelly's lecture will take place in the same location at 4pm on Wednesday 29th.

A Coventry University academic has played a leading role in a new study showing how the UK’s ‘Motorsport Valley’ business cluster has made a strong bounceback since the...

A group of Performing Arts graduates from Coventry University’s School of Art and Design are working flat out on a producing a new theatre piece for a free, one-off...

Coventry University has appointed a new executive dean for its world-renowned Faculty of Engineering and Computing.