The city of Coventry will once again experience the passionate cinematography of Middle Eastern film, as a movie festival supported by the Centre for Trust, Peace and Social Relations opens at Coventry University later this week.

The Middle Eastern Film Festival – beginning on Friday 4th March – will feature a selection of films from across the region, playing at the Square One Cinema in the Hub. The event, which is to be attended by the Deputy Lord Mayor of Coventry, has been organised by the student-led Culturae Mundi, and Linguae Mundi initiatives, it will be the second time Coventry University has hosted the festival.

The festival will begin with a short film produced by three female students from the Middle East College, Oman. Hawra Salim Al Fahdi, Aneesa Hamood Al Amri and Hajer Yahya Al Tuwaijri are award-winning photographers who have already exhibited their previous work internationally. Their short film – Culture of Oman – was shot over a three-week period and features many of the historic sites of Oman, focusing on the rich culture of the area.

The students were invited to Coventry’s Middle Eastern Film Festival after winning a multimedia competition held at the Middle East College, in which they competed against 49 other students to earn the opportunity to feature their film at the festival.

Speaking about their work, and their path to the Festival Al Tuwaijri said:

We are so glad to have won and now we are excited to be travelling abroad to the Middle East Film Festival in the UK, we hope that it will be a fruitful experience.”

The students’ work will be followed by a selection of films and talks throughout the festival, including films such as: The Gatekeepers, Amreeka and A Girl Walks Home Alone At Night. All films aired at the festival cost an entry fee of £1.

For more information about the festival and to book tickets, please visit www.culturae-mundi.com 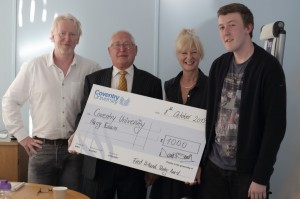 Creative licence doesn’t stretch far in the legal realm, but one Coventry University student has pushed the boundaries - and his own knowledge - to earn himself a £1,000...