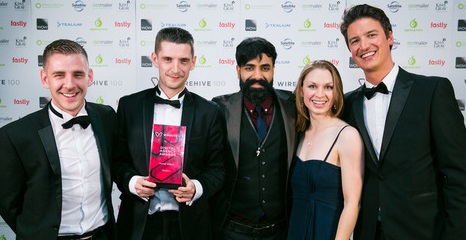 A digital marketing agency spearheaded by a Coventry University alumni has been crowned the fastest growing agency.

Reddico were crowned winner of the Fastest Growth Award, which recognises the efforts of businesses over the last three years, at the Wirehive 100 award ceremony earlier this month.

The event, hosted at Mercedes Benz World in Weybridge, brought some of the leading names in the digital marketing sphere together under one roof, in an evening of presentations and celebration.

Reddico founder Luke Redding, who graduated from the university in 2011 after completing a BA in Enterprise and Entrepreneurship, said:

I’m absolutely thrilled to have won this award and it means a lot for the company to be recognised in such a competitive industry. We’re still young and have come a long way over the last few years – so it just shows that hard work and commitment really does pay off.

“Reddico would never have won this award without the amazing efforts of the whole team, and everyone deserves a pat on the back for putting in the hours and giving the company a huge platform from which to build on. Hopefully there are many more of these to come.”