Graduate entrepreneur is thinking outside the box 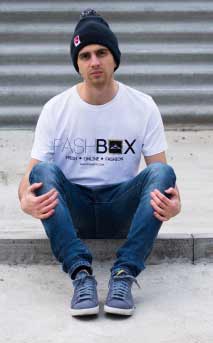 A Coventry graduate who set up his own online fashion store with the support of the University's Institute for Applied Entrepreneurship (IAE) has celebrated his first anniversary in business.

Blake Timms, 25, from Bedworth, studied sport management at Coventry University but caught the entrepreneurial bug when he took a business start-up class as part of the unique Add+vantage scheme.

After a year of research, Blake hit on the idea of tapping into popular street culture and starting up an online fashion store specialising in urban brands by British designers, and Fashbox was launched in September 2013.

One year on, the business is growing and Blake's unique fashion offering is attracting interest from all around the world. Key to his success has been the support he received from the Institute for Applied Entrepreneurship.

"About 6 months into my business, I thought I could really benefit from the support and insight of a mentor who would be able to look at a new business in a different light," said Blake.

"When I was at university I had already been involved with IAE so I knew of them and what they could do. I wasn't sure if they could help out an alumnus, but all it took was a phone call. The response was really positive and within ten days I was having my first meeting with my mentor."

Blake's mentor was able to offer advice on anything from the day to day practicalities of management - such as the financial operations and making the most of online technology - to getting into a business mindset and thinkingahead of the curve in the business world..

"One of the most important things that my business mentor advised is to stick to doing a few things right and complete them first, then move on to the next set of targets. You cannot achieve everything in a short period of time."

And what about the name Fashbox?

"It's a double meaning, with 'Fash' obviously relating to the fashion element. The 'box' part is that sense of excitement when you are opening something new straight out of the box, but it also refers to the creativity of fashion and thinking 'outside the box' to define your style.

Fashbox aims to empower you with your choice."

Four of the latest fashion graduates from Coventry University are in the running for honours at the prestigious Midlands Fashion Awards 2014, which take place at the...

An aerospace technology graduate from Coventry University has won backing from Richard Branson for an idea which could dramatically cut the cost of launching a mini...