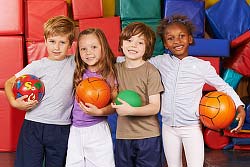 Young girls who exhibit a poor mastery of fundamental movement skills (FMS) are more likely to be obese than boys who have similarly low skills, according to research led by Coventry University.

The study – which won an award1 at the recent British Association of Sport and Exercise Sciences conference – assessed among other things the running, catching, and balance skills2 of 250 girls and boys between 6–11 years3, categorising their FMS as either low, medium or high.

Researchers at Coventry University, working in collaboration with Middlesex University and the University of South Carolina, then cross-referenced the kids' motor skills with their body fatness4 to investigate the relationship between the two. The children's habitual physical activity was also taken into account5.

The researchers found that:

We know from previous studies that primary school children with a higher body mass index are likely to have poorer fundamental movement skills, but our research is aiming to understand this relationship in more detail – particularly how gender may play a role.

What we've found is significant because it signals a need to review the strategies we have to enhance motor proficiency in girls, and means we should be engaging health practitioners and PE teachers to help explore and understand how additional opportunities or different techniques may be required compared with boys.

The next big question – which we're continuing to research – is whether developmental delays in acquiring these motor skills, whether in girls or boys, may actually be the cause of children gaining unhealthy weight status.